Seven lions could not cope with the porcupine 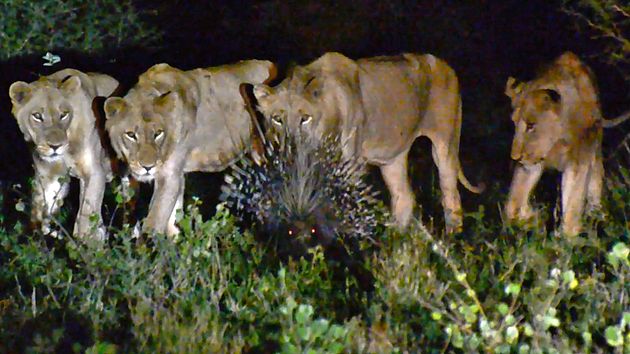 Seven lions could not cope with one porcupine – their fiasco was captured by a camera in the Kruger National Park in South Africa.

Although history seems unlikely, one must take into account the fact that African porcupines are quite large animals. In length, these rodents reach 90 cm, weigh up to 27 kg. The body protects long and sharp needles, but they do not stop predators. Lucky people who manage to turn the porcupine on their backs will get tender meat.

Young lions on the video did not regale themselves. Despite the numerical superiority of predators, the porcupine dexterously parried attacks and eventually left predators with a nose.

The author of the video is a worker of the park Henny Becker. She says that seeing a porcupine is a rarity, because animals lead a secretive way of life. The clash of lions with a porcupine is also a rare sight, since large cats usually avoid attacks on prickly rodents because of fear of injury. However, in recent years such situations have been observed in South Africa more often. Due to the drought and loss of populations of ungulates, lions and tigers are hungry and ready to risk attacking the porcupine.