Sharks able to feed on algae are found 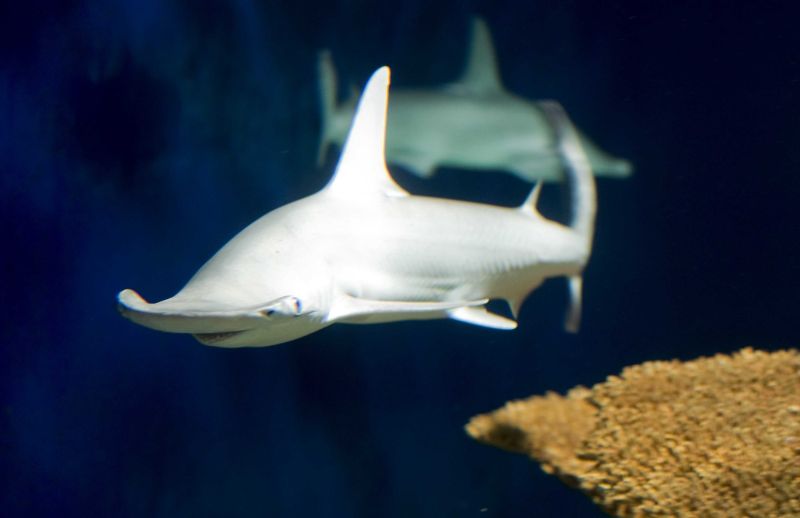 Small hammerhead fish were omnivorous and able to live on a diet, 90 percent consisting of plant foods.

Sharks have a reputation for extremely carnivorous animals. In fact, almost all these fish are real predators, and only some of them filter their prey from the water, as well as the animal – plankton, squid, small fishes. Accordingly, their digestive system with a short intestine, not designed for digesting “heavy” plant food and algae, is arranged.

Not too distinguished against this background and small hammerhead (Sphyrna tiburo) – a small family of the famous hammer S. zygaena. Distributed in the Pacific and Atlantic Oceans along both coasts of Central America, they are considered gregarious and active predators, feed mainly on shellfish, crab, small fish and shrimp caught in densely overgrown “underwater forests.” Therefore, it is hardly surprising that the algae that are constantly found in the stomachs of these fish did not cause big questions, although in some young individuals their content may be more than half of the mass extracted from the stomach.

However, Samantha Leigh from the University of California at Irvine and her colleagues were interested in this and decided to study the matter more closely. At the annual meeting of the Society for Integrative and Comparative Biology (SICB) held in San Francisco on the first days of January, she talked about experiments with the maintenance of small sharks-hammers in captivity on three meals a day, consisting of 10 percent of shellfish and 90 percent of thalassia algae (Thalassia testudinum).

Despite such a “vegetarian” diet, after three weeks all the experimental sharks felt fine and even gained weight. Moreover, thalassia was grown in a separate aquarium enriched with a short-lived isotope of carbon-13, so the algae carried in their composition these harmless but convenient for the researchers radioactive labels. They were also found in shark tissues, clearly showing that S. tiburo sharks are able to absorb carbon from plants – scientists estimate that almost 59 percent of plant biomass is digested.

The question remains, how exactly short and little adapted shark intestines digest complex plant carbohydrates. So far, the authors have managed to show an increase in the activity of beta-glucosidase, an enzyme that catalyzes the hydrolysis of cellulose and other poly- and oligosaccharides. But, apparently, without bacteria there was not even in the life of small hammerhead fish, the intestinal microflora plays an especially important role, making them not so much predatory as omnivores.