Side effects of meditation are revealed

Specialists from the Brown University and the University of California in Santa Barbara conducted the first qualitative assessment of the side effects of meditation.

The popularity of Eastern spiritual practices raises interest in their safety. By analogy with Taijiquan, which has evolved from martial art to gymnastics, now Buddhist meditations are often considered, first of all, as a system of methods of contemplative improvement (mindfulness-based interventions, MBIs). At the same time, more than 75 percent of scientific works devoted to the effects of such studies are focused on their positive influence. Possible negative consequences of meditation, according to a number of observations, include the risk of psychosis, mania, epileptic seizures – the prevalence of such cases can be underestimated by 20 times. In addition, often the purpose of research is to test narrow hypotheses, and experiments are conducted with violations.

The study of the side effects of Buddhist practices is also limited by the difficulties in quantifying the relationship between MBIs and symptoms. Instead, the authors of the new work (including a neuroscientist, psychologist, religious experts and methodologist) conducted a qualitative analysis. Using a semi-structured interview, they interviewed 60 practitioners of the Theravada, Zen and Tibetan Buddhist schools at the age of 18. Conversations suggested discussing three topics: a description of the experience of meditation, including the unpleasant; Interpretation of impressions; And a story about ways to protect against negative consequences. In addition to respondents, 32 experts – gurus or doctors – used MBIs in their work as interviewees. They answered questions about practitioners.

The researchers have processed the data, taking into account the six causality criteria that are used by the World Health Organization (WHO), the US Food and Drug Administration (FDA) and other organizations. In particular, the connection between the subjective dynamics of practices and the state of health was revealed by the parameters of the temporal proximity of phenomena, the aggravation of early symptoms, the conclusion of experts, and others. If the answers correspond to two or more criteria, the authors attributed the phenomenon to possible side effects of meditation. The results showed that 29 percent of the respondents experienced negative consequences of the practices in the first year, 45 percent – within ten years. 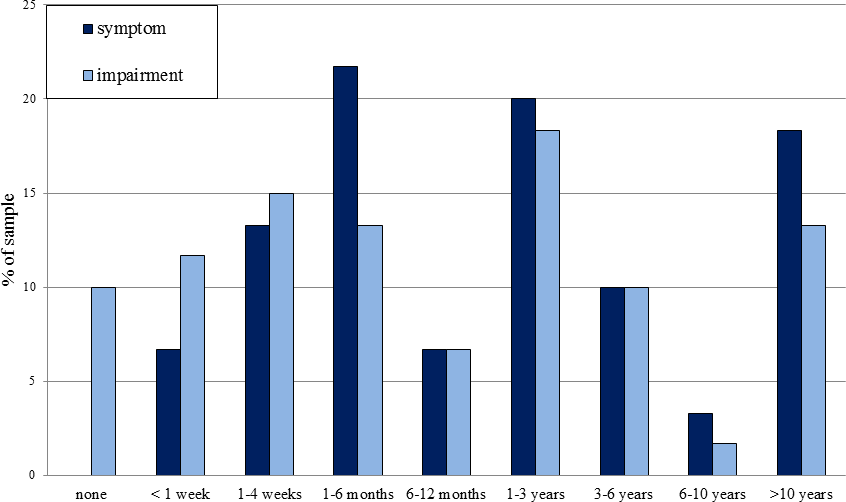 Prevalence and duration of side effects of meditation (blue) and their complications (blue color) / © Jared R. Lindahl et al., PLoS ONE, 2017

In total, the researchers identified 59 side effects, including anxiety, fear, changes in perception, sleep disorders, and gastrointestinal disorders (GI tract). Moreover, the list included conditionally positive manifestations, which were often accompanied by discomfort. For example, increased concentration of attention was associated with the risk of obsessive thoughts (about the need to preserve the state of no-mind), and hallucinations – with increasing anxiety in the transition from intense meditation to the performance of everyday activities. 82 percent of practitioners reported increased emotional sensitivity, including paranoia and empathy. Many experienced somatic effects: pain, fainting, decreased sexuality.

The answers of each practitioner and the evaluation of experts allowed on average to establish for the symptoms four criteria of causality. Negative experience of the overwhelming majority of respondents was repeated: 88 percent of them, according to the indicator of consistency, reported similar experiences. Often it was a question of moderate or severe violations within the same category of effects, which last 1-3 years (range – from several days to more than ten years). Participants also indicated that the side effects of meditation affected their daily lives, and only 10 percent of them described the negative experience as insignificant. According to the researchers, the work supplements available data on the possible negative consequences of spiritual practices.