Signs of the existence of another universe are discovered 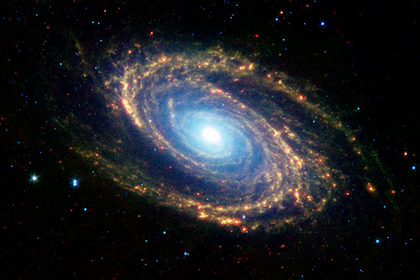 A group of physicists, including Roger Penrose, found evidence in favor of a conformal cyclic cosmology – a theoretical model according to which the remote future of one universe is a singularity with which another universe begins to expand. According to the researchers, the fluctuations of the cosmic radio wave background, called B-modes of polarization, are a consequence of evaporation of black holes in the previous universe. The preprint of the article is published in the arXiv.org repository.

Conformal cyclic cosmology was proposed by Penrose in 2005, the scientist tried to explain the discrepancy between the second law of thermodynamics, according to which the entropy of the universe should increase with time, and the inflation model, which implies that the random selection of certain cosmological constants brought the universe to its present state (that is, the Universe at the time of birth was more disordered). Penrose suggested that the apparent disorder was in fact the previous Universe with the maximum entropy level, but only a part of the states (degrees of freedom) passed from it through the singularity of the Big Bang.

In other words, Penrose believed that the infinitely expanding universe, in which all matter is transformed into electromagnetic radiation, is mathematically indistinguishable from the singularity with which the next Universe will begin to exist. According to the physicist, if this hypothesis is correct, then there must be anomalies in the cosmic radio wave background.

In his new work, the scientist and his colleagues showed that such anomalies can be relict B-modes of polarization – the so-called “vortices” of polarization of the relic radiation, which arise from inhomogeneities in the medium due to gravitational waves. The researchers showed that the twenty B modes registered by the detectors of the BICEP experiment in 2014 were evaporating supermassive black holes in the previous universe. The time lines of these holes can be considered as “Hawking points”, leaving a gravitational trace in the new universe.