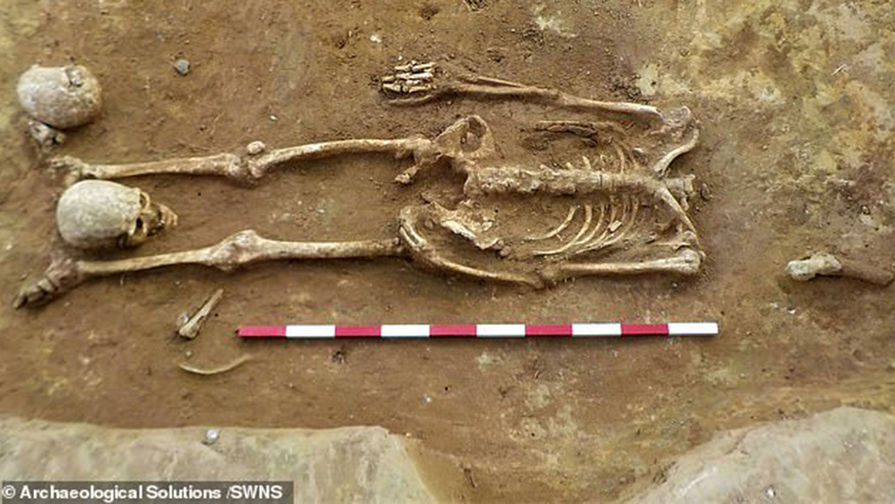 Skeletons with skulls placed between the legs were found during excavations at a construction site in England. Archaeologists attribute the mysterious find to the ancient Roman period. Most likely, the unusual position of the remains testifies to the conduct of a special burial ritual.

A strange Roman grave of the fourth century AD was discovered by archaeologists at a construction site near the town of Bury St Edmunds in Suffolk County in the southeast of Great Britain, reports the Daily Mail. In 17 of 52 excavated skeletons, the skulls were separated from the spine and placed between the legs. Of particular interest to researchers was the fact that eight mysterious skeletons belonged to adult men and women of middle age, and one to a ten-year-old child.

Experts are convinced that the buried people were not executed – rather the unusual position of their remains is a consequence of a special funeral ceremony.

After examining the skeletons, archaeologists came to the conclusion that the heads were neatly separated after the death of people. Cut the neck from the back just below the jaw. According to Andrew Peachy from Archaeological Solutions, in the case of execution with an ax or sword, the remains would have been characterized by damage.

“Most likely, a group of people who came to these lands practiced a special cult of burial,” the expert emphasized. “Of course, now we are considering a very specific part of the population, which had very peculiar traditions of burying their dead.”

At the same time, Peachy noted that during their life these people were very high quality and abundantly fed and in the majority were well developed physically. This can serve as confirmation that they worked in agriculture.

Alleged farmers had a lot of sugar and carbohydrates in their diet, which adversely affected the condition of their teeth. In addition, some suffered from tuberculosis.

The 35 thousandth Beri, located 60 km from the North Sea, was founded around a Benedictine abbey no earlier than the 11th century. However, the area was actively colonized by the ancient Romans, who began the conquest of Britain in the middle of the first century. n e. (although Julius Caesar made a relative failure attempt a century earlier.) Since the middle of the XIX century, archaeologists working in the area have found coins, ceramics and other antiquities relating to the civilization of ancient Rome. So, the researcher of the century before last, Samuel Lewis, believed that Villa Faustini was in the place of the contemporary Bury Saint Edmunds.

Upon completion of the research, the skeletons found during construction will be identified in the museum archives.

A month ago, a skeleton in high boots was discovered in the bottom sediments of the old Thames bed. An unusual find was made by workers who laid a tunnel at the Chambers Wharf pier in the Bermondsey district of London. As experts from the Archeology Museum of London (MOLA) have already stopped, the remains lay untouched for about 500 years. At the time of death, the man was about 35 years old.

In November last year, during excavations in Zaraysk near Moscow, archaeologists found a mammoth skull with a treasure hidden inside. In the same month, unknown vandals destroyed an ancient cave burial in the Peruvian province of Kanchis: The remains of the native inhabitants of America, who had lain intact for about 5,000 years, were thrown from their graves and dumped in a pile.

And in October, during excavations in the Italian region of Umbria in the so-called “burial of vampires” were investigated the remains of a ten-year-old child of unknown sex with a stone in his mouth. Scientists consider the unusual circumstances of the burial part of the funeral ritual: with the help of a “gag” the contemporaries of the deceased, apparently, tried to protect themselves from the spread of the disease. The head of the excavation, David Pickel, expressed the hope that the find would tell researchers about the malaria epidemic that had affected Umbria about 1,500 years ago. The most vulnerable victims of the virus were children and infants.

The bodies were buried at the site of an abandoned Roman villa, which was built in the first century. before. n e.

Until now, archaeologists believed that the cemetery was intended only for children and unborn fetuses: the oldest child of more than 50 graves found at the excavations was a three-year-old girl. Stones were tied to her hands and feet — they did this so as not to let the dead person out of the grave.