Slightly open secret of the origin of the Scythians 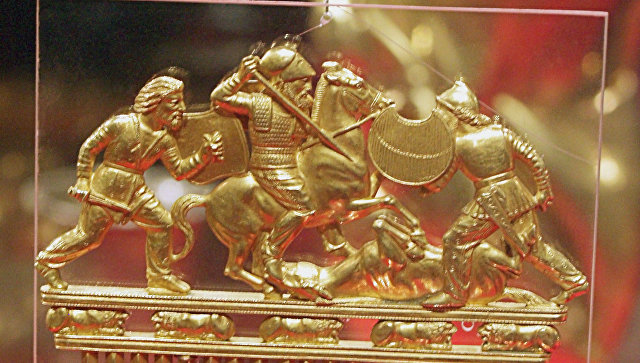 Anthropologists from Moscow University, claim that the legendary Scythian tribes living in the southern steppes of Ukraine and Russia, were the indigenous population of these regions, mingled with a small number of migrants from Central Asia.

The Scythians, an ancient people who lived on the territory of the black sea and the Caspian steppes in the 8-4 BC. In different historical periods historians of the Russian Empire, Poland and several other countries mistakenly believed the Scythians and the related Sarmatians “founding fathers” of their Nations, not knowing the differences between the languages of the Slavs and the Iranian-speaking tribes. Today, scientists no less fiercely arguing about the origin of the Scythians.

“Today there are two main hypotheses of the origin of the Scythians. They could come to the territory of the Northern black sea region from Central Asia and the indigenous Indo-European population was conquered and assimilated. Or the Scythians are genetically connected with log culture — Union of the tribes of the late bronze age of the steppes and forest-steppes between the Dnieper and the Urals”, — says Alla Movsesian, an anthropologist from Lomonosov Moscow state University, quoted in the press service of the Moscow state University.

Genetic data and characteristics of the device of the skeleton and skull of the Scythians and their putative relatives, as explained Movsesian, can help us to understand which of these two hypotheses is correct. Following this idea, Movsesian and her colleague, renowned anthropologist Barbara Bakholdina, studied the structure of the three hundred skulls of the Scythians of the five different populations of these people who lived in the Northern black sea regions and in the Crimea.

Comparing the small features in the anatomy of the skulls of the inhabitants of the same villages, the scientists looked for small ancestral features in their structure that would help to understand how close the Scythians were more ancient inhabitants of the steppes of Russia and Ukraine, as well as various Sarmatian tribes and the contemporary Central Asian nomads.

As explained Movsesian, variations in the structure of the skull, such as extra or irregular openings, irregular joints, limbs, bones at the fontanelles, and the seams of the skull are hereditary nature. It allows you to trace relationships between populations, even without data on the device of their DNA, with which, however, does not agree with some genetics.

Defining a typical set of such small features in the structure of the skulls for each studied tribe, Bakholdina and Movsesian found that both the hypothesis of ethnogenesis of the Scythians was partly true: the Scythian gene pool was formed on the basis of descendants of the local carcass culture of the Bronze age and populations who migrated from the Central Asian Andronovo and Okunev cultures.

Similar conclusions can be drawn about the origin of the Sarmatians, however, according to scientists, is not enough data. Similar results, as noted Movsesian, once again, refute the misconception that the Scythians and Sarmatians could play a role in the formation of the first Slavic tribes that moved even in the Soviet times.

“According to the hypothesis of academician Rybakov, outlined in the book “Gerodotova Scythia”, part of the Scythian tribes, called Scythians may have taken some part in the ethnogenesis of the Slavs in the long-time geographical proximity. However, the idea that the Scythians were the direct ancestors of the Slavs, is not supported by neither archaeological nor anthropological nor genetic or linguistic data,” concludes anthropologist.