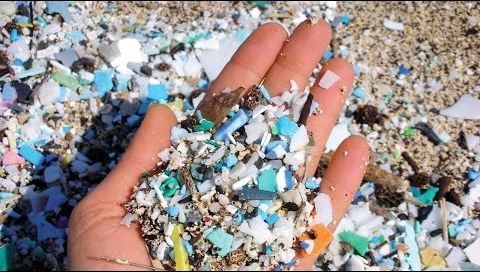 Ecologists of the Plastic Change organization explore the water area of the Hawaiian Islands. During the mission they will try to define, the Pacific Ocean is how polluted by small pieces of plastic.

Experts speak: garbage on a water surface are only an iceberg top. They believe that annually to the seas and oceans throw out millions of tons of plastic products.

[Christian Syuberg, biologist]:
“There are several hypotheses of where there is a plastic rest. He can swim at different depths in the thickness of water, something, perhaps, has fallen by an ocean floor, and something has got to a food chain”.

Large particles of plastic become fragile under the influence of sunshine, then they are crushed by waves or teeth of sharks and large fish.

[Henrik Pedersen, founder of the Plastic Change organization]:
“Look at it. They are microplastic. Has cast him ashore. The ocean works as the blender and crushes plastic for such small pieces”.

According to ecologists, because of such garbage birds and marine animals perish. Small pieces of plastic get to their food, and then get stuck in digestive tract.

[Meagen Lemson, employee Fonda of protection of the wild nature of Hawaii]:
“When this set of garbage casts ashore, or it gets stuck in reeves, it does harm to both marine ecosystem, and health of the person”.

Activists consider that pollution of the ocean is already global problem. In their opinion, within the next ten years the amount of plastic in sea waters will double, at the same time a part of garbage will be cast by waves ashore.