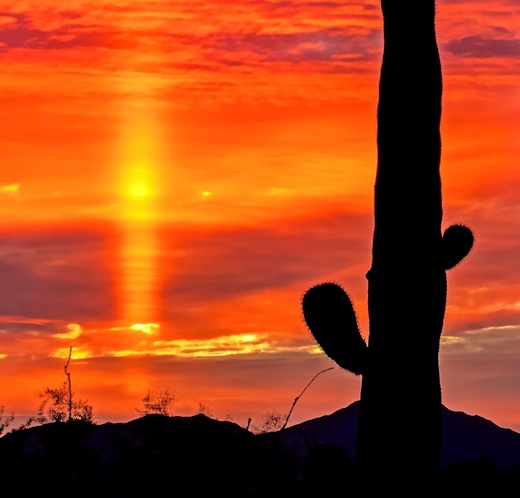 Over the weekend, ice clouds over Tucson in the US state of Arizona forced Eliot Hermann to fear that he would not be able to see the Comet Virtanen. Although he succeeded in observing the cosmic guest, he witnessed another amazing phenomenon.

As the sun began to sink below the horizon, a yellow glowing column appeared in the cold desert air. Plate-shaped ice crystals, propagating from cirrus clouds, caught the rays of the setting sun and distributed them in a vertical line, forming a solar column.

“It was a great consolation and made the end of the day special,” says Herman. “The saguaro cactus in the foreground gave the picture realism and expressiveness.”

Comet Virtanen on December 16 flew past the Earth at a distance of just 11.5 million kilometers – one of the closest cometary approaches to Earth in the entire space age.