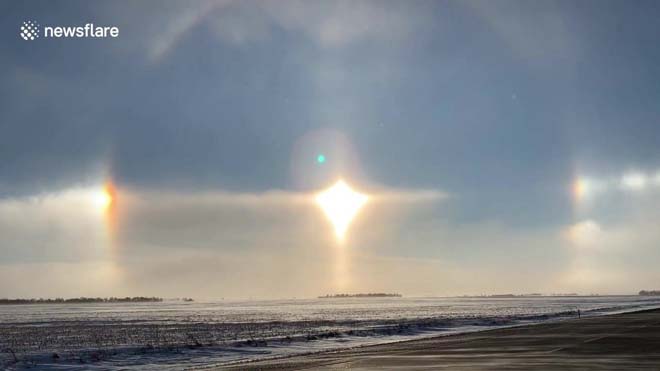 Two amazing atmospheric phenomena – the solar halo and the “rainbow of fire” – were observed on February 4 in the sky over Minnesota, USA.

A halo appears around the solar disk at the moment when small ice crystals in the Earth’s atmosphere refract sunlight. This phenomenon is usually associated with the presence of cirrus clouds at an altitude of 5-10 km in the upper layers of the troposphere, or ice fog. The radiance of the ring around the Sun can be of various colors – from white to the color of the rainbow.

The “rainbow of fire” is officially called a circular-horizontal or near-horizontal arc. This is a type of halo. Certain conditions are necessary for a relatively rare optical phenomenon to appear in the atmosphere: the sun must be above 58 degrees above the horizon, light cirrus clouds must also be observed high in the sky, and flat hexagonal ice crystals should be placed horizontally in them.