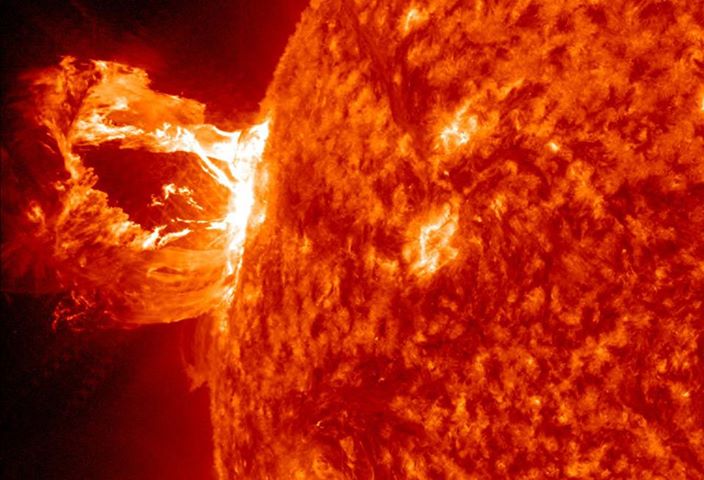 The new study found that solar storms can not only charge the Earth’s atmosphere with an excess charge near the poles, but also produce the directly opposite effect: to promote the formation of regions that have almost no electric charge. These findings provide a deeper understanding of the effects of solar storms on the Earth’s atmosphere, and can also help improve radio communications and navigation systems in the Arctic.

A team of researchers from Denmark, the United States and Canada made this discovery in a study of a solar storm that reached Earth on February 19, 2014. This storm had a marked effect on the Earth’s ionosphere in the northern latitudes.

Solar storms are often accompanied by emissions of solar matter, called coronal mass ejection (CME). During this eruption, the electric charged solar particles are directed toward the Earth. When the atmosphere of our planet reaches the solar particles cause perturbations in the Earth’s magnetosphere, known as geomagnetic storms. The interaction between the CME particles and the atmosphere of our planet can lead to the formation of unstable regions with an increased number of electrons in the ionosphere, an atmosphere region beginning at an altitude of about 80 kilometers and containing ions and electrons.

This geomagnetic storm, which occurred in 2014, was caused by two powerful CMEs directed toward the Earth. As a result of this storm, scientists first observed the usual zones for such events with a high concentration of electrons in the sky over Greenland, but then discovered to the south of these zones extensive areas of space (ranging from 500 to 1000 kilometers) where electrons were “almost absent, One of the authors of a new work by Per Hoeg (Per Hoeg) from the National Institute for Space Research of the Technical University of Denmark. These regions remained depleted by electrons for several days.

So far, scientists have not found an explanation for these observations. The main possible versions include recombination of electrons with positive ions or redistribution of electrons.