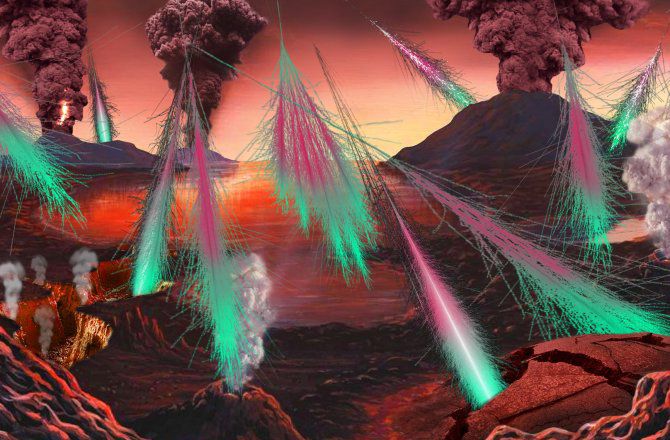 Scientists may have solved facing science over 40 years the problem is that the streams of energy coming from the young Sun, was not enough to melt water ice on the surface of the early Earth to heat up water to a temperature at which rendered possible the origin of life.

The key to resolving this paradox, a team of astronomers from NASA, led by Ramses Ramirez at Cornell University, USA, calls the phenomenon known as the solar superspace, which is a powerful and occurring with a high frequency of solar flares. As a result of these events of high-energy particles from the surface of the Sun headed for Earth and other planets of the terrestrial group.

Computer models built by the authors, showed that the daily stream of high-energy particles coming from the Sun, could shrink the Earth’s magnetosphere and cause it gaps in the polar regions. Then through these gaps, the particles of solar wind penetrate the atmosphere of our planet and initiating a cascade of chemical reactions leading to the formation of gas that causes a very powerful greenhouse effect of nitrous oxide – as well as of hydrogen cyanide, an important connection on the way to biological molecules.

In their study, Ramirez and his team rely on observations of distant stars, collected by the space telescope NASA “Kepler”. This tool allows you to discover the planet from the decay of the luminosity of the stars observed in the case when the star makes a transit of the planet. However, these downturns luminous flux of the luminaries may be different nature, in particular, they can be explained by superspike, explain the authors. With the help of “Kepler” has discovered a lot of stars, reminiscent of the early Sun, which had superspice.