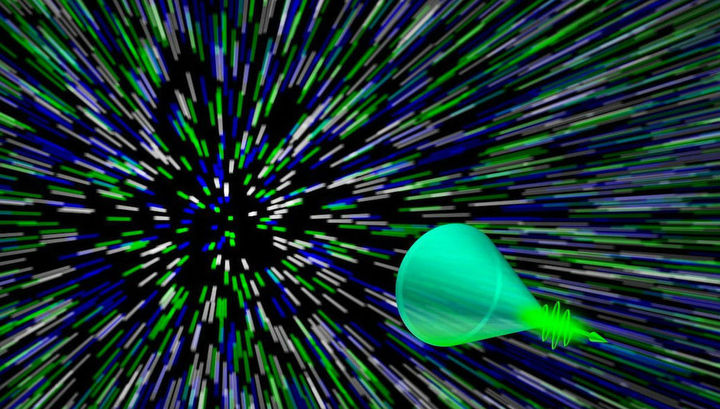 Aircraft flying at supersonic speeds, creating a sonic cone-shaped shock wave. About the same way, pulses of light can leave behind a cone-shaped tracks. And recently, scientists have videotaped this phenomenon using high-speed camera.

According to experts, the new technology that was used for this discovery that one day may allow scientists to see the excitation (activation) of the neurons and thus to image activity in the brain in real time.

But back to the observed phenomena. If an object moves through air, it accelerates it in front of him, creating a so-called pressure waves, which move at the speed of sound in all directions. If the object is moving at a speed equal to or greater than the speed of sound, he overtakes these pressure waves. The result of the pressure wave speed from these objects accumulate on top of each other and create a shock wave. Latest when passing near a person generate sonic booms, similar to thunder.

As we have said, the sound shock wave has the shape of a cone, the region known as the Mach cone extends mainly in the back of a moving supersonic objects.

Light travels at a speed of approximately 300 thousand kilometers per second when moving through a vacuum. According to the theory of relativity, nothing can travel faster than the speed of light in vacuum.

However, light can move slower than at maximum speed. (For example, light moves through the glass at a rate of about 60 percent from their peak). In addition, earlier experiments have shown that under certain conditions it is possible to reduce the speed of light more than a million times.

The fact that light can move through the material faster than through the other, helped scientists create a photon Mach cones. First, the study’s lead author optical engineer jinyang Liang (Liang Jinyang) and his colleagues at Washington University in St. Louis have created a narrow tunnel and filled it with fog, formed by dry ice. This aisle was sandwiched between the plates of a mixture of rubber and powder of aluminum oxide.

After this, the researchers sent pulses of green laser light (each lasting approximately seven picoseconds, a trillionth fractions of a second) through the tunnel. These pulses were dispersed on the particles of dry ice inside the tunnel, creating light waves that could enter into the surrounding plate.

The green light used by scientists, travelled inside the tunnel faster than he did in the plates. In the end, as the laser pulse passed through the tunnel, it formed in the plates taper at a slower intersecting light waves.

With the aim to film this elusive phenomenon of light scattering, scientists have developed electron-optical chronoscopy, which is able to capture images at 100 billion frames per second on a single exposure.

The new camera allowed us to obtain three different views on the studied phenomenon. First, it was obtained a direct image of the scene, and were recorded by a temporary event information, so that scientists were able to reconstruct what happened frame by frame.

In fact, they put different barcodes on each individual image, so even if frames during data collection would be mixed together, they could understand, says Liang.

Today there are other imaging systems that can capture ultrafast events. But these systems usually need to write hundreds or even thousands of frames of the phenomenon under study before get in to see him.

The new system can record ultrafast events in the course of just one approach. Accordingly, the system will help in fixing complex unpredictable events that may or may not be repeated in exactly the same way twice (as in the case of the Mach cone).

The researchers believe that their new method could be useful for recording ultrafast events in complex biomedical contexts – living tissues or moving the blood. We hope to be able to use the developed system for the study of neural networks, to understand how the brain works, concludes Liang.