Spider turns his web into a slingshot 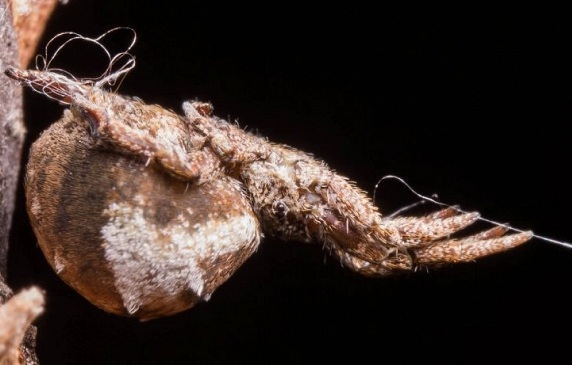 This is the only animal, except man, which uses the “tools” to increase the energy of their muscles.

During the hunt, the North American spider Hyptiotes cavatus uses the web to launch itself towards the victim. To do this, he first pulls the net, and then, should the victim only touch the web, pulls it down and flies. The spider helps not so much its own muscles, as the elasticity of the web.

Nondescript, no more than one centimeter in length, Hyptiotes cavatus with an unremarkable appearance, except that it weaves a web of triangular shape. However, this impression is deceptive. When the prey gets into his network, he does not wait until she gets entangled in them herself, and does not run up to wind it with cobwebs. At first, this spider pulls the web in order to, after releasing it, “shoot” itself towards the victim and confuse it.

Scientists have suggested that for such a hunt, Hyptiotes cavatus uses not so much muscle strength as the elasticity of the web. In order to test their hypothesis, they caught several spiders and put them in terrariums with branches inside – they were carefully put in advance there so that the spiders would have something to weave a web. Scientists threw the fruit flies Hyptiotes cavatus net and filmed the process of hunting video to see in detail what is happening with the net.

The spider’s tool of labor is arranged like this: a thread that the hunter holds tightly with its front paws departs from one of the corners of the net. With its hind legs, it pulls up along another thread fixed to a branch, folding it up and thus pulling the net. In this position, he is waiting for production.

When the fly touches the web, the spider lifts the second thread, and the taut net, like a bow string, with an acceleration of 772 m / s2 (the princess Diana’s car moved at about the same speed as she died) shoots him forward.

Due to the fact that the web dramatically relaxes, its threads are reduced and braid the victim in just 5 milliseconds. Spider flies just 3 centimeters and hangs on the same thread. Apparently, some kind of insurance works – perhaps the spider compresses the spinnerets – the holes through which the web comes out of it.

The researchers calculated the strength with which the network is stretched. It turned out that if the spider would pull it up like a fisherman, without using the elasticity of the threads, it would not have had the strength of its own muscles. For this, the spider’s musculature would have to be 20 times greater than itself.

Scientists note that the spider is the only known animal, except man, who knows how to use tools that are not related to his body, to strengthen his own forces. In this, H. cavatus looks like a man with his ballista, catapults and slingshots. Reinforcing mechanisms are used, for example, by fleas or shrimp-mantis, but it would be incorrect to compare them, because these mechanisms are parts of their bodies.