Spiders have taught people how to weave heavy-duty threads. 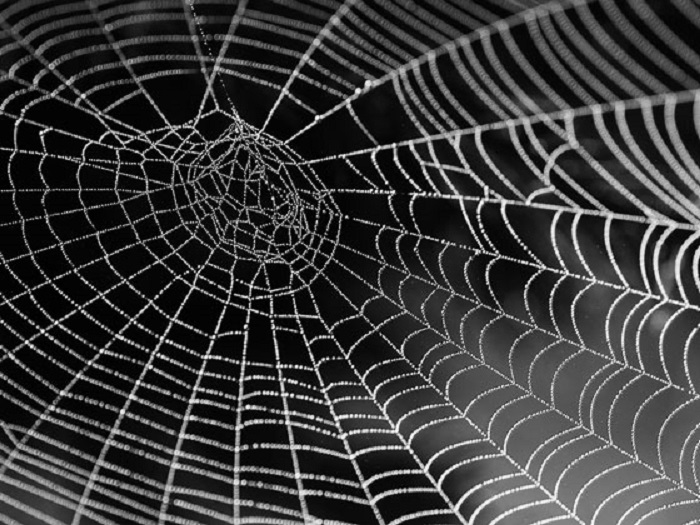 Perhaps spiders cannot be called attractive creatures, but their creation – the web – causes not only admiration for its geometrical correctness, but also for its unique properties – strength and elasticity.

Spider silk is produced by special glands located in the back of the abdomen of the spider. There are at least 7 types of spider glands that produce different threads, but none of the known spider species has all seven types at once. He usually has from one to four of these pairs. The structure of the web ideally worked over hundreds of thousands of years of evolution. Its thread is thinner than a human hair, and the specific (i.e., calculated per unit mass) tensile strength is higher than that of steel 5 or 6 times! According to the calculations of scientists, she would be able to stop even an airliner if she had a pencil thickness.

Naturally, humanity, copying many of the design finds of nature, could not disregard such a process as spinning the web. In the end, they managed to produce equally durable materials, for example, polyacrylonitrile, but in its structure, of course, these are not the finest web threads.

Without stopping, scientists continued research. And at the University of Utah, arthropod genes have been added to goat’s DNA, and as a result, the web can be filtered out of milk. In 2011, Dutch scientists connected artificial skin with cobwebs derived from the milk of genetically modified goats and created bullet-proof fabric. During the experiments, the material reflected 5.56 caliber bullets.

And not so long ago, the news came from the Italian University of Trento, where scientists fed spiders with water containing carbon nanotubes or graphene plates. As a result of such a diet, the web showed strength 10 times higher than the natural one, which today is considered the highest strength among fibers. The value of this idea is, according to the Italians, that opens the way to the use of a natural and effective process of using the spiders themselves for the production of hardened bionic silk fiber. Moreover, such a process of natural reinforcement of biological structural materials can be used with other animals and plants, leading to the emergence of an innovative class of substances — bionic composites.