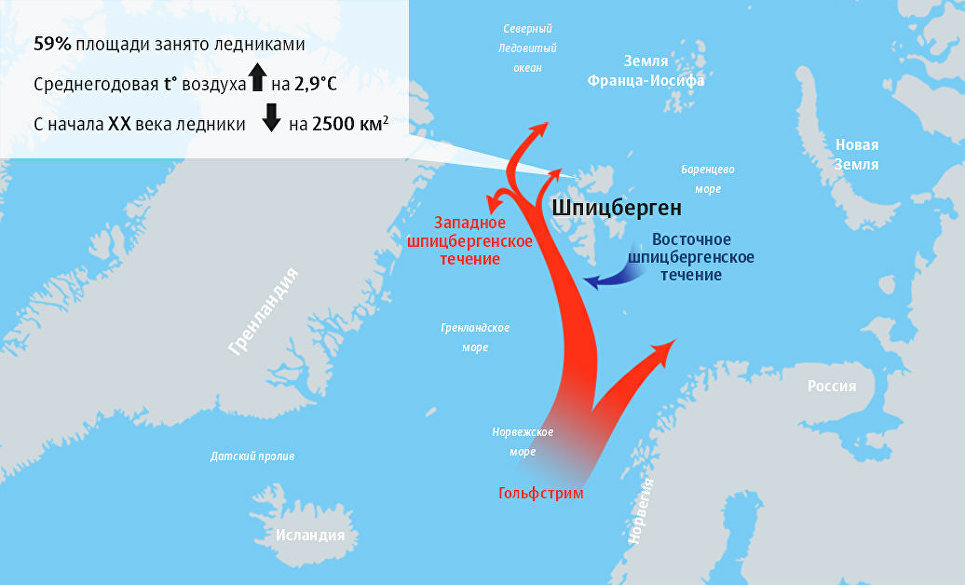 The Spitsbergen archipelago is the westernmost part of the Russian Artica. From the east it is washed by the cold current originating in the Arctic Ocean, and from the west – a branch of warm Atlantic currents, thanks to which in winter in Spitsbergen, not all the sea bays freeze even in winter, sharp warmings occur, the temperature rises above zero, heavy rains occur. Therefore, Spitsbergen, located only a thousand kilometers from the North Pole, is called “the Arctic paradise”.

Spitsbergen survived all geological epochs. Four hundred million years ago it was covered by giant ferns and horsetails, which turned into rich deposits of coal. In the Mesozoic era here lived giant lizards, later in the tropical forests of the archipelago were wild beasts and birds.

For the last millennium, Spitsbergen was encased in a powerful ice shell, but to this day only a little more than half of it has survived. In the small ice age of the XVII-XIX centuries, the archipelago became colder. It was warmed only by 1920. Since the late 1980s, the average air temperature here is skyrocketing.

Scientists say that over the last century in Spitsbergen warmed a second time. And very intensely. The ice shell is melting, the permafrost degrades, forming so-called taliks – a non-freezing area for several years inside the frozen soil. Taliki threaten the stability of residential and economic buildings, which is fraught with problems for human economic activity.

According to experts, in the next decade many large glaciers can remain only on the slopes of the mountains. And on the site of the retreating glaciers of Spitsbergen arctic tundra with a lot of lakes, ponds and streams is formed, which, in turn, creates conditions for the settlement of the archipelago by more southern species of fauna.

The increase in temperature is also facilitated by the release of carbon dioxide from the soil. This is one of the main components that enhance the greenhouse effect: the amount of CO2 that enters the atmosphere from the soil disturbed by human activity has increased 2-4 times in recent years.

Spitsbergen sensitively reacts to climate change, acting as a harbinger of those processes that will then manifest themselves to the east – on Franz Josef Land and Northern Earth.