Spring flowering in the North Sea on a satellite photo 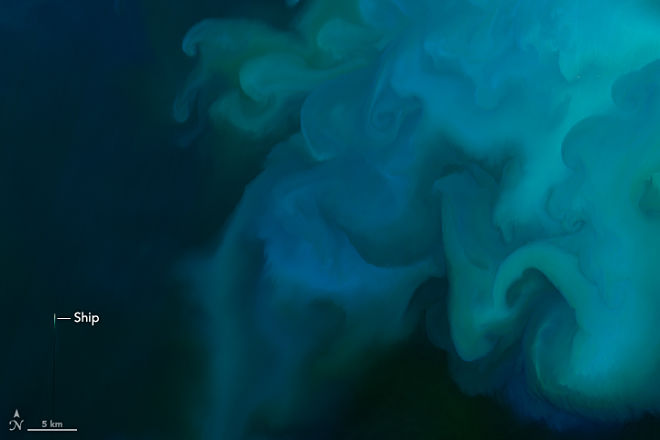 With the advent of spring on the grass the grass begins to turn green, the trees and primroses blossom. And the ocean is not an exception. He warmed by the sun, he also starts to bloom. Tiny organisms, called phytoplankton, float near the surface and convert sunlight and carbon dioxide into sugars and oxygen. They themselves become food for pasture zooplankton, mollusks and sea fish.

On Saturday, May 5, the satellite Landsat-8 captured the flowering of phytoplankton in the North Sea. The next day the “Aqua” satellite observed the same picture in a broader context.

Milder light waters are probably filled with coccolithophores, and more green areas with diatom algae. To know for sure, you need water samples. The brightness of the color can reflect the density of the phytoplankton, while the various vortices and forms are complex movements of currents, whirlpools and tides. 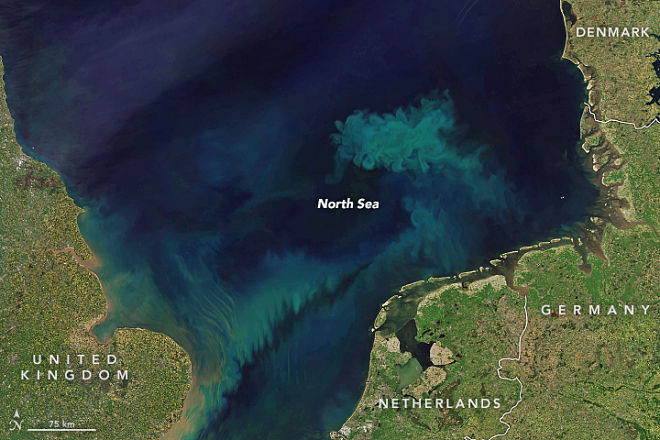 Phytoplankton is most common in the North Sea in late spring and early summer due to the high level of nutrients in the water. Melting sea ice and increasing runoff from European rivers carry a large mass of nutrients in the sea, and also desalinate surface water. In addition, intense seasonal winds blowing over a relatively shallow sea mix water, bringing nutrients to the surface.

In a study published in August 2017, a team of scientists from the United Kingdom found that the amount of phytoplankton in the North Sea had declined since the late 1980s. The reasons are not entirely clear, but, apparently, they are associated with a decrease in nutrients due to less runoff from European farms and cities, an increase in sea temperature and a change in the level of illumination.