Sprites from a height of 10 km 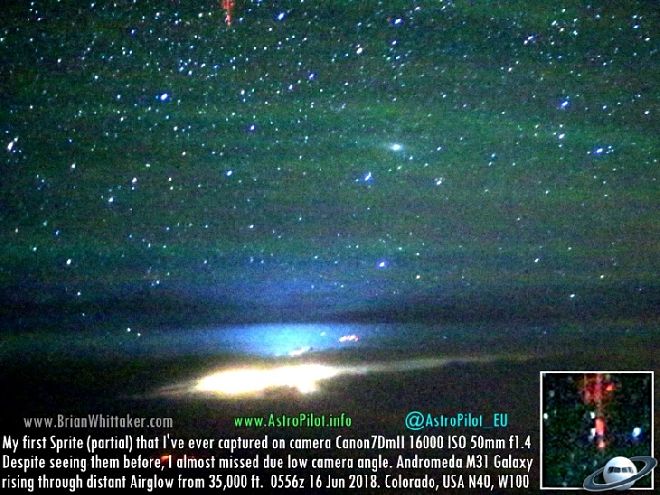 The pilot Brian Whittaker spent thousands of hours making flights to London from the US – during this time he saw many wonders of the night sky through the glass of the cabin. But only recently he finally took a picture of his first sprite.

As told by Whittaker, on June 16 he flew from Las Vegas to London, when the plane flew several very active thunderclouds. He observed a lot of quick flashes of lightning – when suddenly a sprite appeared from one cloud.

Green stripes in Whittaker’s image are not auroral lights, but rather a glow of air. The glow of air is caused by the variety of chemical reactions in the upper layers of the Earth’s atmosphere. These reactions begin at daylight, when the atmosphere literally “bathes” in strong UV radiation from the Sun.

The glow of air occurs just above the height of the appearance of most sprites. Whittaker noted that sprites do appear at high altitudes and suggested that they could skip a lot of “cosmic lightning” over the years simply because his camera was set too low.

Summer is the season of sprites and a good time for photographers to direct their optics to the area above the tops of thunderclouds.