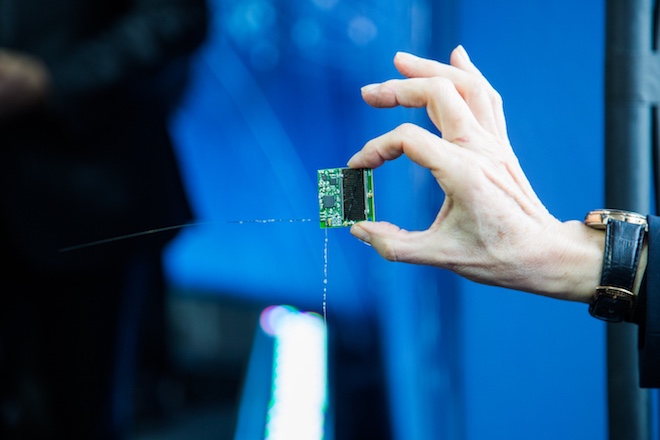 Researchers of NASA united with Stephen Hawking to create the space nanostarprobe vehicle capable to travel with a speed of 1/5 from velocity of light.

The ship received the name StarChip, in case of success it will be able to reach the star system, next to Earth, the Centaur alpha in 20 years.

Stephen Hawking announced the Breakthrough Starshot project in April, also the team of the Korean institute of science and technologies is involved in it. However whether 20 years’ flight will be able to endure the spaceship? And the help of NASA — according to researches of the agency exactly here is required, space radiation can lead to the fact that the device will cease to work long before completion of a 20-year mission. NASA was offered by several options for the problem resolution for implementation at development stages. They provided results of the researches at the International conference on electronic devices to San Francisco.

First, it is possible to correct a flight route to avoid zones of the raised radiation. But it can add years to duration of a mission and won’t surely protect the ship from destruction. Secondly, the ship can be constructed with filters on electronics. But at the same time the vessel will increase in the amount of and weight that will slow down its amazing speed. As the third option researchers of NASA offered the silicon chip which could self-repair automatically. However while it is only about theories — researchers still should do considerable work to solve the main objectives of interstellar travel.

As Stephen Hawking declared in April: “Restriction which faces us now is great emptiness between us and stars. However now we can overcome it. By means of light beams, light sails and the easiest spaceship from ever constructed we will be able to start a mission to the Centaur alpha during generation. Today we will make this following great breakthrough in space because we are people and our nature — to fly”.