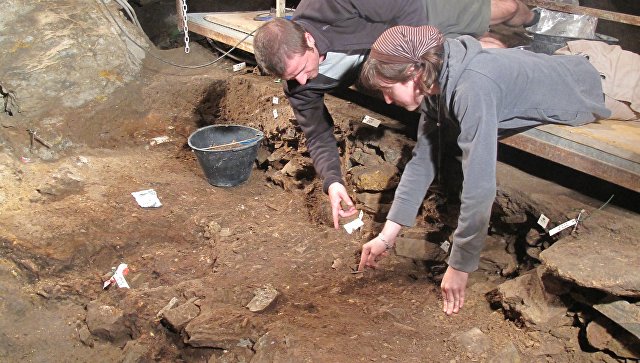 Excavations in one of the caves in the North of Italy revealed a very unusual burial rituals the first CRO-magnon – burying countrymen, they paint their body with ochre, drafting patterns, pieces of gravel, then smashed the stones.

“Usually, our colleagues rarely paid attention to these objects – if they noticed, they consider them to be ordinary pieces of pebbles and threw them together with other “garbage.” We need to start to pay careful attention to such objects, which usually fall into the category of boulders and stones. Something that looks like a normal natural stone, may actually be important,” says Julien Riehl-Salvatore (Julien Riel-Salvatore) at the University of Montreal (Canada).

Today scientists believe the first modern humans entered Europe about 45-40 thousand years ago, traveling in several ways – through the Balkans, the Islands of the Mediterranean sea and moving across the coast of Africa to Spain. Traces of these first people in the form of artifacts and orinyansky Hrvatskoj cultures, preserved in the caves of southern France and Northern Italy, have helped scientists figure out how to look these people and find hints as to why they “won” the Neanderthals in the competition.

One of the reasons for this victory today, many scientists believe that culture and religion possessed the CRO-magnons, and which, presumably, were deprived of the Neanderthals. An example of this is the fact that 20-30 thousand years ago the CRO-magnons had a complex burial rituals, decorating the body and the graves of the dead colors, patterns of stones and other things that could be useful to their fellow deceased in the afterlife.

Riehl-Salvatore and his colleagues found that one of the strangest rituals of the era arose approximately five thousand years earlier than previously thought, and was distributed much more than is commonly believed studying the “garbage” collected during excavations in the cave of Arene Candide in 2011.

In this cave, located in the mountains of Northern Italy, in the distant past, on the decline of the era of the existence Hrvatskoj culture and during the appearance of its successor, epigravettian culture, lived or was buried just a large group of people, about 20 children and adults the CRO-magnons. Their remains were discovered by paleontologists in 40 years of the last century, and since then deposits of Arene Candide are examined periodically in search of new artifacts and traces of life of the first inhabitants of Europe.

Studying the materials collected in the course of one of the latest round of excavation, scientists noticed that their predecessors found in the cave many small pieces of pebbles composed of rocks not found in the “tomb of the stone age”. Some of them, they found traces of ochre, red-brown mineral paint, while others were crushed or half destroyed.

Such strangeness has forced scholars to look for traces of similar rocks at other sites of the ancient people. It turned out that they were – like shape stones, covered with ochre, have been found by archaeologists in the vicinity of other tombs of CRO-magnons buried in later historical periods.

How do you think Riehl-Salvatore and his colleagues, these poluraspredelenia stones are marks of one of the most ancient funeral rituals in human life. According to them, the inhabitants of the cave like a pebble used as a “brush” for drawing patterns on the body of the deceased, and then carried it outside and ritually smashed to pieces, taking the whole half as a souvenir or talisman.

Why did they do it? As observations show for the African and Amazonian tribes, stuck in the primitive society, the stone age people thought their tools “live” objects endowed with a soul and their own motives. So they would ritually “kill” such pebbles, splitting it apart and sending her on a journey to the afterlife along with the deceased. If this is true, then similar religious traditions existed among the first inhabitants of Europe for five thousand years earlier than suggested by the historians.