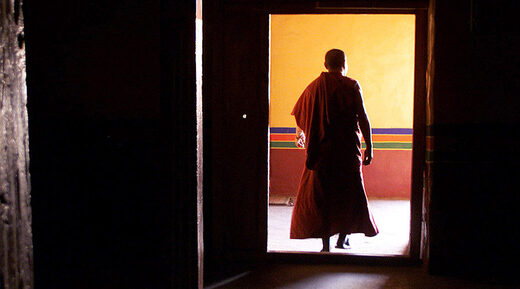 It is believed that one of the most remarkable effects of lifelong meditation may be the relatively slow aging process of the body. Recent proof of this was the death of Tibetan Buddhist monk Geshe Lhundub Sopa on August 28, 2014, at the age of 91.

Geshe Lhundub Sopa, who was the Dalai Lama’s mentor in Tibet, moved to Wisconsin in 1967. There he co-founded the Deer Park Buddhist Center and taught South Asian studies at the University of Wisconsin, becoming a friend of prominent American neurobiologist Richard J. Davidson.

Three days after his cardiac arrest, Geshe Lhundub Sopa was leaning against a wall, his odorless body perfectly still, his skin fresh. He looked as if he were meditating…

Sopa died on August 28, 2014. Five days later, two days after Davidson’s first visit, the neuroscientist returned to Deer Park and examined his friend’s body a second time. “There was absolutely no change. It was really very surprising,” he said.

Tibetan Buddhists believe that such monks have not yet died but are in a deep, concluding meditative state called tukdam, during which consciousness gradually transforms into clear awareness (“clear light”), after which the body begins to decompose. After seven days, Sopa’s body began to decompose and he was cremated.

Davidson and his colleagues investigated the tukdam phenomenon using the tools of neuroscience.

Curiously, their original paper, published earlier this year, found no brainwave activity in the dead monks. Here’s the abstract:

Recent EEG studies in the early postmortem interval, which suggest that electrophysiological coherence and connectivity in the animal and human brains are preserved, reinforce the need to further investigate the relationship between brain activity and the dying process.

Neuroscience now has the opportunity to empirically assess the long-term process of dying and, more specifically, to investigate the possibility of brain activity after cardiac and respiratory function ceases.

Led by the Center for Healthy Minds at the University of Wisconsin-Madison in India, a study was conducted on the postmortem meditative state cultivated by some practitioners of Tibetan Buddhism in which decay is presumably delayed. For all healthy subjects presented here, we collected electroencephalographic data on resting state, negativity mismatch (MMN), and auditory brainstem response (ABR). In this study, we present HB data to demonstrate the feasibility of an EEG configuration with sparse electrodes to capture well-defined ERP waveforms from living subjects under very challenging field conditions. While live subjects exhibited well-defined MMN and ABR responses, no recognizable EEG waveforms were detected in any of the tukdam cases.

In short, whether monks meditate postmortem or not, it is unclear why their bodies do not decompose for such a long time. As a rule, decomposition occurs within hours of death.

There is a practical side to this:

Western medicine should already be changing its generally accepted definition of death, John Dunn and Davidson argue. As Tibetan Buddhists have long believed, biological death is more like a process–or a journey through various states–than a simple switch.

In short, whether monks meditate posthumously or not, it is unclear why their bodies do not decompose for such a long time. As a rule, decomposition occurs within hours of death.

There is a practical side to this:

Western medicine should already be changing its generally accepted definition of death, John Dunn and Davidson argue. As Tibetan Buddhists have long believed, biological death is more like a process–or a journey through various states–than a simple switch.

Of course, this phenomenon raises questions about the nature of consciousness:

An example would be consciousness itself. Although sentient beings, including humans, have had consciousness for centuries, we still do not know what consciousness really is: what its full nature is and how it functions.”

It is worth recalling that researchers have already demonstrated that Tibetan monks can alter their metabolism. For decades, it was thought that claims that meditating monks of the Buddhist tradition could significantly raise their temperature or slow their metabolism were exaggerations that could be scientifically explained. It turns out that the scientific explanation is that they can do just that.

Tukdam is a more complex mystery, but it points to the possibility that consciousness is not connected to the brain in quite the way we thought.