Sun flares cause anomalies in the structure of human cells 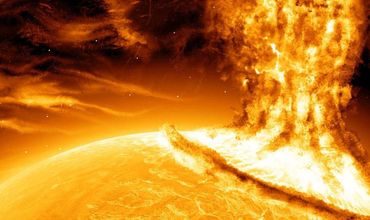 Scientists from Tomsk, Khanty-Mansiysk, Voronezh and Sevastopol conducted a joint study on the effect of flares on the Sun on the stability of human genetic material and found that during flares such structural anomalies appear as changes in the cell nucleus and epithelium necrosis, the TASS news agency reported. State University (TSU).

“According to the results of the study, in the buccal epithelium of the examined men, cells with such anomalies of the structure as the micronucleus (the result of an incorrect chromosome mismatch during cell division), pathological changes in the structure of the nucleus and epithelial necrosis cases were revealed,” the report says.

It is noted that such anomalies are most often reversible. “In our body, cells with a pathological structure are constantly formed, but a healthy person has several levels of reparative (restoration) protection, which these processes successfully regulate. However, we are still too little aware of the positive and negative effects of solar energy on humans, therefore research needs to be continued “, – the words of the TSU scientist Nikolai Ilinskih are cited in the message.

Scientists from Tomsk, Voronezh and Sevastopol State Universities, the Siberian State Medical University and the Khanty-Mansiysk State Medical Academy have tried to assess the influence of heliophysical factors on the human body. For the analysis of genetic material, they used micronucleus test buccal epithelium. In the framework of the project, men aged 18 to 21 years leading a healthy lifestyle were surveyed.

According to the press service of the TSU, previously there were works in the scientific environment that say that increased solar activity affects such human physiological characteristics as arterial pressure, coronary circulation, erythrocyte sedimentation rate, response time to light and sound signals, and others. There were also unconfirmed data on the effect of outbreaks on the sun on the formation of malignant neoplasms (oncology).

During flares on the Sun, a large number of different particles are directed toward the Earth — these are alpha and beta particles, protons, electrons, neutrons, and positrons. They move at different speeds and reach the surface of the Earth in 2-4 days. Most of them linger in the upper atmosphere of the Earth’s magnetic field. Electromagnetic radiation is also generated, moving at a speed of 300 thousand km / s and reaching the Earth eight minutes after the flash. The effects of individual solar flares can be observed during the week.