Supernova explosions of stars called the cause of cancer 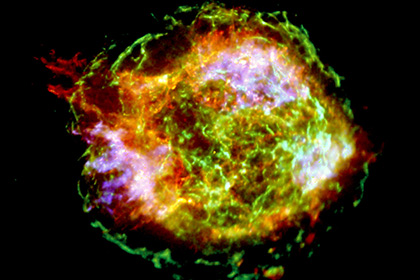 An international team of astronomers and physicists have identified a possible impact on Earth by two of the supernova that erupted two million years ago in the vicinity of the Solar system. According to scientists, this could lead to a change in the behavior of animals and humans, and increase the incidence of cancer. Preprint of the article published on the website arXiv.org. About the study, told New Scientist.

Recent astrophysical research has shown that from about 1.7 to 8.7 million years ago at a distance of 100 parsecs from the Earth exploded two big stars. In the result of cosmic catastrophe, our planet is bathed in radiation and matter that left traces in the form of the isotope iron-60 on the seabed and in lunar rocks. Supernova has not led to a mass extinction, but scientists decided to find out exactly how the explosion could affect life.

Astronomers believe that the most significant impact could provide visible light. Supernovae are very bright, eclipsing all other stars in their galaxy. However, in this case broke out, the stars were comparable to the full Moon illuminated the night sky during one year. This could not impact on those animals that are used to focus light from a natural satellite of the Earth. The lives of many insects, including mating, reproduction, oviposition and foraging, dependent on the lunar lighting. Also, the supernova could affect circadian rhythms and behavior of Homo erectus, a human ancestor.

Scientists have also calculated that the radiation background of the Earth could increase three times, which could increase the incidence of cancer in Homo erectus. However, this effect, according to experts, was not to be as strong as on Earth at present, there are populated places where the background is 20 times the global average. According to experts, worry would only be the case if the figure was 1,000 times more.

However, scientists recognize that a supernova occurs when penetrating radiation fluxes of muons — high-energy particles. The annual dose of such radiation is comparable to a procedure computed tomography that can increase the likelihood of leukemia and brain tumors.