Surprising abilities of an elephant trunk 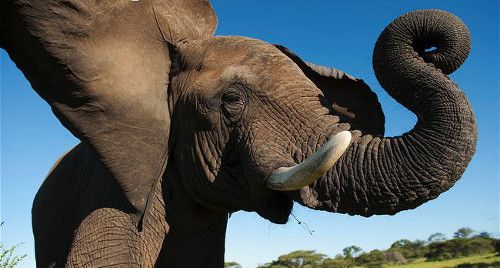 Despite the huge sizes, an elephant — one of the most delicate animals on Earth. Its flexible trunk is capable to make surprisingly thin operations, and now researchers precisely know as it works.

Ask the child to pick up chips from a floor, and it most likely will crumb them. And here this operation doesn’t cause any difficulties in a 6000-kilogram elephant. An elephant trunk — the unique adaptation capable is careful to lift and break not only pieces of fried potatoes, but also objects of absolutely different size, from small seeds to big logs. Mechanical engineers decided to investigate limits of this dexterity and defined, how exactly the trunk can be at the same time such strong and gentle.

Working with elephants in a zoo of Atlanta, engineers put before animals of grain and cubes of the different size, and also a granule from a swede, filming the events with two cameras. Delicacies settled down on a special plate which measured force of influence of a 150-kilogram trunk. It turned out that the elephant trunk copes with the help of creation of temporary folds: having moved a joint is closer to the basis, the elephant does the lower part softer and flat. One elephant, Kelly, could transfer without problems to integrities and safety corn tortilla at all, having used only 1/30 from the gross weight of a trunk.

On it experiments don’t come to an end, and authors of a research intend to collect in the future as much as possible data on anatomic features of a trunk. It isn’t excluded that they will be useful for creation of the robots of new generation participating in construction and search and rescue operations.