Surprising transparent mollusk at the island of Bali 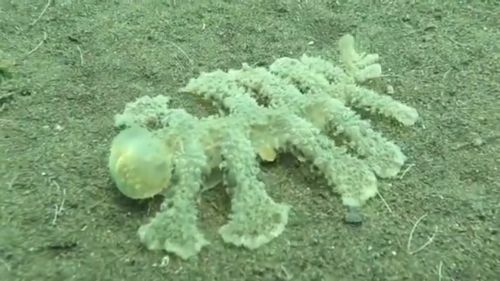 At the coast of Bali the diver has photographed an unusual marine animal — he has 13 paws and the head extending like a hood. Length of a surprising being makes 12,7 cm.

Though the origin of “find” has caused a controversy, the majority was considered nevertheless that it is the species of a sea slug under the name Melibe viridis belonging to the Tethydidae family. These Gastropoda mollusks treat group golozhaberny — their feature consists in lack of a sink and the expressed cloak, on each side or on a back they have secondary skin gills in the form of outgrowths (gills can be absent at all). Animals are hermaphrodites and are very captious in food.

Melibe viridis use the expanded oral cavity (hood) bordered with touch feelers for search of food. Along a body they have located outgrowths which fall off during attack of predators. The body of mollusks usually appears through and happens pale yellow or green color. They live in the Mediterranean and Red seas, occur in the water area at Indonesia and Mozambique.