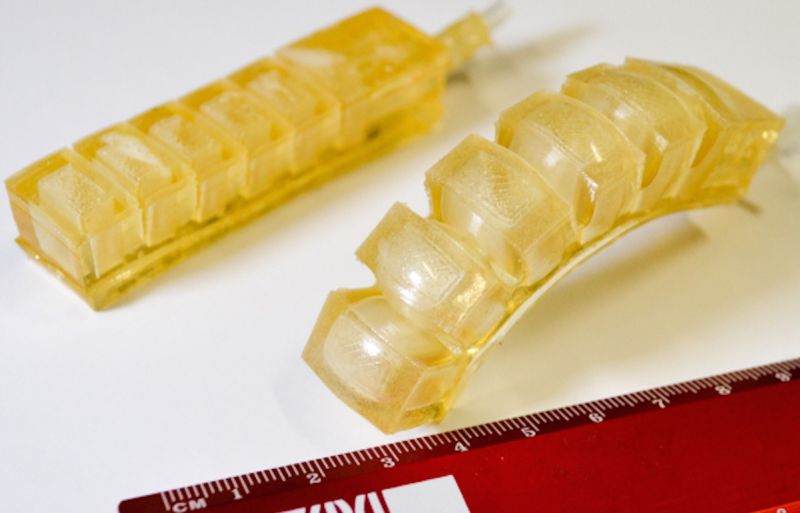 A group of scientists from the Laboratory of Intelligent Systems of the Federal Polytechnic School in Lausanne, Switzerland, designed a drive made from edible materials. This drive was used to create a robotic caterpillar 9 centimeters long. Such a robot can easily move through the human gastrointestinal tract, performing diagnostics or delivery of medicines.

The body of the robot-caterpillar consists of gelatin and glycerin, but is arranged as follows: inside it is located several cavities separated from each other, into which compressed air is alternately pumped. When the pressure in different cavities changes, their displacement relative to each other occurs, and the body of the robot coils, like a caterpillar. Due to the rhythmic change in pressure, the edible robot caterpillar is able to move, and with the simultaneous filling of all the cavities with air, the robot acquires a structure capable of holding various objects.

As already mentioned above, the robot can be used in medical practice for targeted drug delivery and diagnostics, although the developers have found several more functions that a small robotic mechanism would be able to perform: thanks to a tiny size and remote control capability, using an “edible caterpillar” It is possible to examine the debris that has arisen as a result of various emergency situations and to conduct a search there for the survivors. Moreover, if the robot is increased in size, it can become for the affected source of food or water enclosed in the body chambers of the mechanism. But that’s not all: thanks to their “edibility”, on the basis of such mechanisms autonomous robots can be created that feed on their own body, which will act as a source of energy.