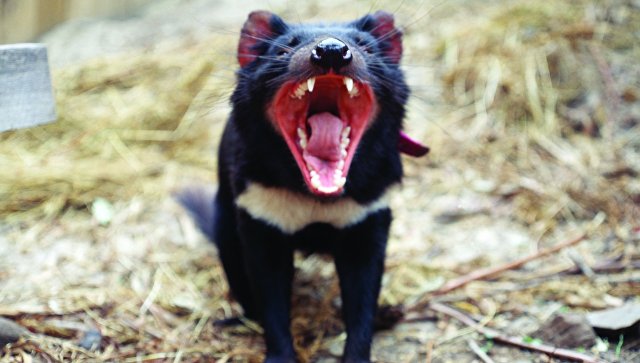 Tasmanian devils are dying because of the epidemic of infectious cancer DFTD began to acquire immune response to this unusual disease, which gives hope for their survival, say biologists in an article published in the journal Nature Communications.

Similar results surprise – the rapid evolution of animals requires initially high genetic diversity, but Tasmanian devils with this indicator in big trouble. Although our study suggests that devils will survive on their own through evolution, we still have to provide all conditions for their survival, said the Race, McCallum (McCallum Haish) from Griffith University in Brisbane (Australia).

In the mid-1990s among Tasmanian devils has spread a bizarre disease DFTD, the causative agent of which was made by the cancer cells, affecting the animal’s face. The spread of DFTD has led to the fact that over the last 20 years the population of devils has declined by 80%.

Genetic analysis conducted in 2013 by a group Elizabeth Murchison of the University of Tasmania (Australia), showed that all modern lines DFTD descended from a single strain of cancer cells originated in the body of one of the devils in the early 1990s. Apparently, this individual was a female, indicated by the two female X chromosomes in the genome of cancer cells. Last year, scientists found that in fact there are two varieties of cancer, DFT1 and DFT2, propagating in parallel.

As noted by McCallum, about seven years ago, he made the forecast at a speed of extinction of devils, according to which populations of devils have been completely disappear in some parts of Tasmania to this day. This has not happened, what led scientists to study what happens to these animals and why they refuse to die.

To do this, McCallum, Murchison, and their colleagues turned to the archives of observations of the devils, which scientists are from Tasmania since 1999, and have analyzed how changing the number of these marsupial predators over the past 17 years, and studied DNA samples collected in the course of this monitoring in three different corners of the island.

As it turned out, the devils genome has changed markedly over that time – the authors of the article found in it two small areas of DNA that have markedly changed the result of the war between cancer and marsupial animals. According to geneticists, five of the seven genes in these regions are associated with the immune system and protection from cancer – gene protect against skin cancer MCAM as well as areas of C1QTNF5, THY1, a regulator of responses to cancer of CBL-c and the CRBN gene is associated with development of myeloma.

According to McCallum, the spread of new variations of these plots among the devils is a Prime example of evolution in action, and the work of natural selection in large populations of animals. Interestingly, in this case, the evolution has manifested itself as noticeable after 4-6 generations that talks about the unusually high speed of its work in populations considered genetically degenerate.