Tea bag helped find a crack on the ISS 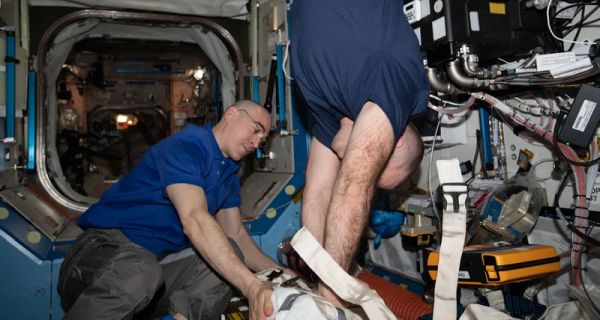 To close up the “gap into space”, as the hole has already been nicknamed, it was proposed with scotch tape and foam rubber.

The ISS crew was able to locate an air leak from the space station. To solve the problem, they used a tea bag and scotch tape.

In mid-October, the crew of the 63rd long-term expedition to the International Space Station (ISS) finally managed to localize an air leak discovered a year ago. It was recorded in September 2019, and at the end of August this year, its speed doubled – from 270 to 540 grams per day. In September 2020, the rate of leakage increased to 1.4 kilograms of air per day, which required a detailed examination of the ISS and made it possible to find out that the problem was in the Russian Zvezda module, which was originally assumed by the National Aeronautics and Space Administration (NASA) …

At the present time, it has not yet been possible to find the hole – for the search we also used plastic bags with plastic wrap, and sealed the elements of the Zvezda module with adhesive tape, and also used cotton swabs and GoPro action cameras to help ourselves, but in the end help in the search the tea bag helped.

According to RIA Novosti, flight engineers Anatoly Ivanishin and Ivan Wagner, using a tea bag flying towards the hole in the intermediate chamber of the Zvezda module, discovered a crack in the area of ​​the broadband communication system. From Earth, Russian cosmonauts were advised to use scotch tape, film and foam rubber in order to seal the “gap into space” – a special plan was sent from the flight control center into orbit with a scheme for pasting the discovered hole.

As a reminder, at the present time on board the ISS as part of the long-term expedition ISS-63 are Roscosmos cosmonauts Anatoly Ivanishin and Ivan Wagner, as well as NASA astronaut Christopher Cassidy. On October 14, they were joined by Russian cosmonauts Sergei Ryzhikov, Sergei Kud-Sverchkov and American astronaut Kathleen Rubins – they arrived at the ISS on the Soyuz MS-17 spacecraft.