Teeth of Earth’s first ichthyosaurs talked about their diet 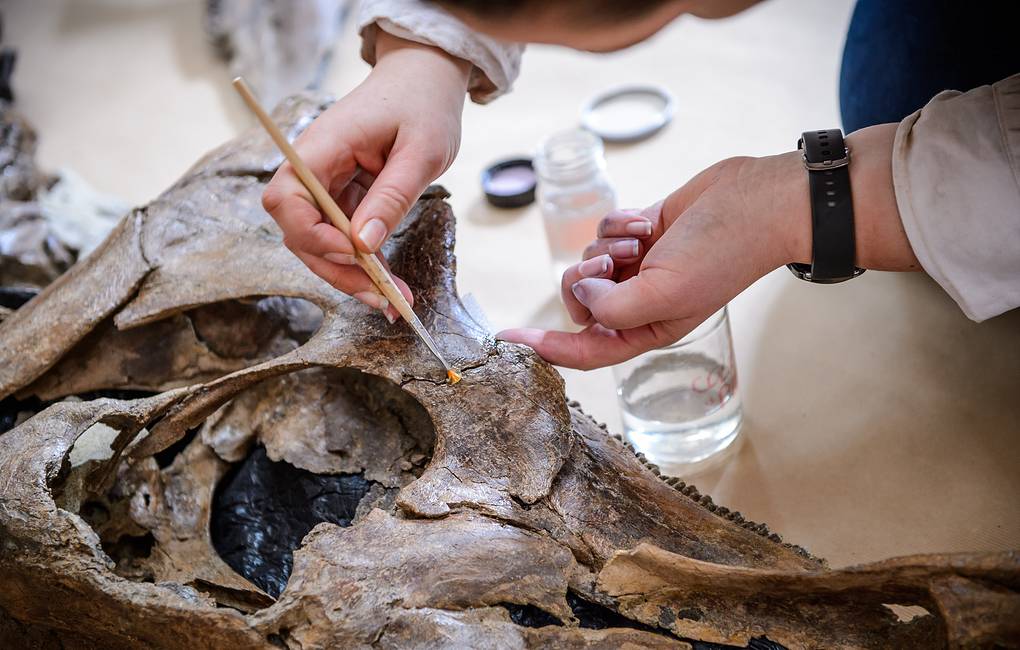 Scientists have found in China well-preserved jaws of one of the first ichthyosaurs of the Earth. Analysis of these residues showed that marine reptiles ate shellfish with a hard shell. The results of the study were published by the scientific journal Scientific Reports.

“We still very roughly imagine how ichthyosaurs appeared. Most likely, in evolutionary terms, they were closer to dinosaurs, birds and crocodiles than to lizards, but even this is not a wholly fact. Having studied the unusual round teeth of these marine reptiles, we began to better understand how they appeared on Earth, “said one of the authors of the study, curator of the Field Museum of Natural History in Chicago (USA) Olivier Rippel.

The oceans of the time of the dinosaurs were inhabited by a wide variety of marine reptiles, including dolphin-like ichthyosaurs, long-necked plesiosaurs, as well as pliosaurs and mosasaurs that looked like crocodiles. All of them were not relatives of dinosaurs, many of them are more likely close to modern lizards and other reptiles.

The remains of marine reptiles are rarely preserved, which is why until recently, scientists knew practically nothing about their appearance and habits. Nevertheless, over the past decades, scientists have learned some of the details of their lives.

In particular, paleontologists found that ichthyosaurs began to bear cubs in the womb, and not lay their eggs, even before the transition to life in the sea. In addition, scientists have found many common features in appearance and anatomy that combined them with modern dolphins.

According to Rippel and his colleagues, despite this, scientists do not yet know how ichthyosaurs arose, how they came to life in the sea and what the first representatives of these creatures on Earth ate. Paleontologists obtained the first information of this type by studying fragments of the jaws of the primitive ichthyosaur Cartorhynchus lenticarpus, the remains of the remains of Rippel and his team were found several years ago in China.

The first “dolphins” of the Mesozoic
These ancient reptiles are now considered one of the very first ichthyosaurs on Earth: at least they had the body shape and other features of anatomy characteristic of ichthyosaurs. The carthorns appeared in the Triassic period, about 240 million years ago, long before the first “real” dinosaurs. Their remains, as noted by Rippel and his colleagues, forced scientists to radically revise the evolutionary tree of ichthyosaurs.

Initially, scientists believed that these ichthyosaurs either did not have teeth in principle, or that they did not survive inside the fossil due to the unusual conditions of its formation. After re-examining the skull of Cartorhynchus lenticarpus, paleontologists concluded that part of the teeth could still remain inside it. Therefore, scientists enlightened the fossil using a computer tomograph.

The teeth inside the skull were indeed found. To the great surprise of scientists, a significant part of them looked more like round molars of modern mammals, rather than sharp triangular teeth of other ancient ichthyosaurs and other Mesozoic reptiles. This means that the first ichthyosaurs of the Earth ate very solid food, presumably bivalves and other invertebrate creatures with a strong carapace.

The structure of these teeth and the pattern of scratches on their surface showed that the first ichthyosaurs were rather small. The length of the adult was about 30 cm, which is several times less than the size of marine reptiles of the subsequent Jurassic period.

The rapid growth of their size, as well as the emergence of many other types of teeth, according to Rippel and his colleagues, indicate that ichthyosaurs were one of the most successful inhabitants of the seas of the first half of the Mesozoic. Scientists hope that the remains of other ancient reptiles, as well as the new fossils of Cartorhynchus lenticarpus, will help them understand how these reptiles refused to eat shells and switched to other types of food.