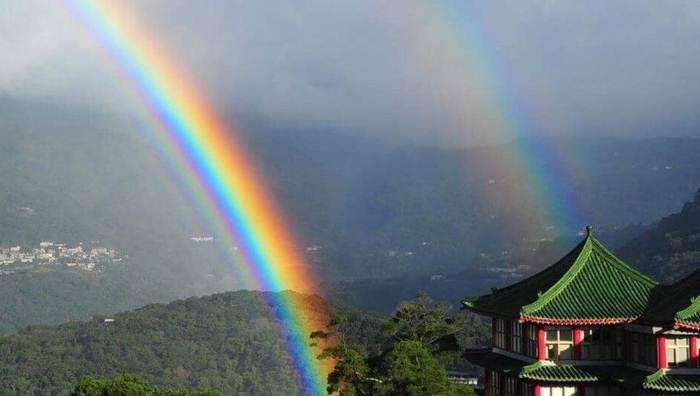 At the end of last year, a rainbow appeared in the sky above Taipei, which did not disappear for 8 hours and 58 minutes. This is a new world record.

November 30, 2017 for almost 9 hours – from 06:57 to 15:55 – the sky over the University of Chinese Culture in Taiwan was decorated with a rainbow. Teachers and students applied for the inclusion of the phenomenon in the Guinness Book of Records, and it was approved. Recently, a solemn ceremony was held in Taiwan in honor of the first mention of this Chinese province in the list of achievements related to the natural sciences.

Thus, the rainbow in Taiwan broke the previous record in the Book: Earlier the longest was the rainbow seen on March 14, 1994, over Wetherby in Yorkshire – it shone for 6 hours. According to meteorologists, the average duration of rainbows in the world does not exceed an hour.

The main campus of the University of Chinese Culture lies among the mountain range of Yangming. The local winter microclimate is characterized by a cloud-forming northeast monsoon. In combination with a relatively low wind speed, up to 5 m / s, the sun’s rays often create long rainbows here. Just a week before the “record”, another long rainbow was seen here, but its duration did not exceed 6 hours.

On November 30, the entire campus looked at the clock with trembling, and after the rainbow overcame the 6-hour line, eyewitnesses began to carefully record the future record, in which there was no doubt.