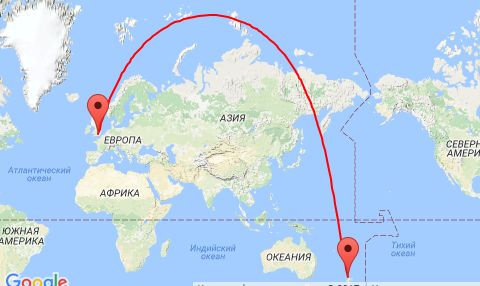 The correspondent of BBC Future talks about the idea of bold canadian engineer, in case of realization of which the flight time from London to new Zealand Auckland can be reduced to half an hour — in spite of all the laws of physics.

In geography, the antipodes are called opposite points on the earth’s surface, lying at the two ends of the imaginary line passing through the center of the Earth. These two points are spaced apart as far as possible.

In the UK the term is often used as a synonym for Australia and New Zealand because these two countries Albion have very long travel.

The journey time between London and Auckland, new Zealand’s largest city, is about 24 hours, given an intermediate landing.

Now imagine a plane that could make such a flight in less than half an hour. Such an airliner would produce a revolution in the air transport industry.

But whether such a violation of the laws of physics — or at least aerodynamics?

Not necessarily, says the canadian engineer Charles Bombardier (the grandson of the founder of the aircraft company Bombardier). The concept of a supersonic aircraft is called “Antipode”.

We asked Bombardier, how people react to his project. “The idea was to fly from new York to London, say, 20 minutes — and that’s what I think really captures the imagination,’ he answered. — People always wanted a transport that could take them to the other side of the earth.”

Bombardier is known for his bold ideas. According to information on its website, “the Antithesis” would be a supersonic business aircraft, capable of speeds in the area of 25 600 km/h fly 24 times the speed of sound.

For comparison: the maximum speed of British-French airliner Concorde exceeded the speed of sound is slightly more than twice (2560 km/h).

It is assumed that “the Antithesis” will be able to fly from any conventional airfield with the help of rocket boosters that will raise the plane at 12-km altitude and up to speed, in 5 times exceeding the speed of sound.

This will be followed by the ejection of the boosters and turns on ramjet engine (PVDR), through which the device reaches the speed, 24 times the speed of sound.

“Effective work PWDR is achieved at speeds five times the speed of sound, so you first need to be dispersed. For this I decided to use rocket engines,” explains Bombardier.

According to him, shot reusable rocket boosters are returned to the airfield takeoff like rocket stages of the project SpaceX, businessman Elon musk.

At such speeds, the aircraft would resemble a missile rather than a plane of the traditional scheme. And this is reflected in the shape of “Antipode”.

His wing will produce enough lift force to planning with the aim of landing on a two-kilometer strip that is commonplace for current Airliners.

But if necessary, the missed approach “Antipode” would have to include a compact emergency rocket boosters to gain speed. (Bombardier offers for this purpose the use of engines similar in design c the development of X-COR Aerospace.)

Spare boosters will serve another purpose: if necessary, they can be deployed and used for braking.

The idea Bombardier should be approached with some skepticism. He himself admits that it is only a concept designed more to start professional discussion and to generate interest in potential new technologies.

And perhaps he had already managed to find a solution to some potential problems.

The previous concept of a supersonic aircraft Bombardier (called Screemr) was designed to fly at speeds 10 times the speed of sound.

Associated with its operation would be similar to the problems of the “Concord”: a strong sonic boom on the ground and high heating of the nose fairing and leading edge of the wing caused by air friction at high speeds.

However, when the Bombardier released its concept is based on professional discussion, he was contacted by Joseph Hazeltine’s company of Wyle, technical contractor for NASA and the Department of defense.

It is that part of the incoming air flow is directed through the nozzle in the nose of the aircraft to create an air stream directed in the opposite direction.

In theory, this aerodynamic phenomenon can reduce the force of a sonic boom and to lower the temperature of heating of the hull. The results of the experiments in the wind tunnel indicate that the technology can be effective.

However, even technology LPM will be unable to finally resolve the issue of heating and the development of the RAMJET engine has not yet reached the level at which such engines could be used for commercial purposes.

It’s also possible that the monstrous overload during acceleration scare off many potential passengers.

“In the end, we’re just talking about concepts, not about the idea, which can be implemented in practice,” says Bombardier.

“Antipode” is a testimony to the belief of the inventor that the exchange of ideas can stimulate technological progress.

“I wanted to help others to obtain funding for further research, so I tried to draw attention to this subject,” says Bombardier.

“I know that this will not lead to the creation of the device that exactly matches my concept, but can be developed new technologies and processes. In this case, I’m glad something helped society.”