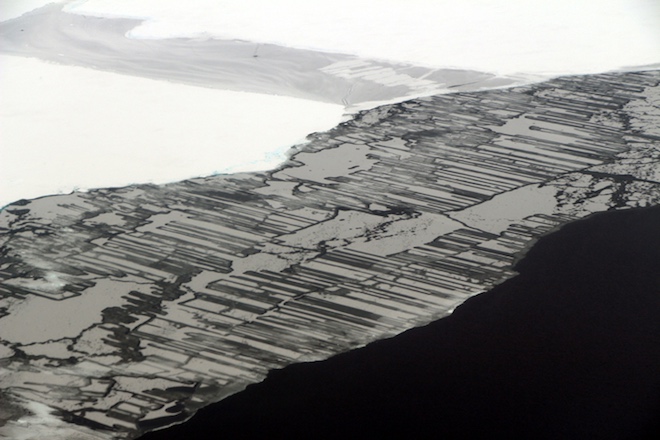 Ice can be stunningly beautiful and also very diverse in appearance. The most obvious differences are between the two main types of ice: land and sea. But even the sea ice itself can surprise with variations in forms.

On Tuesday, November 14, IceBridge scientist John Sontag made this photo of ice in the Weddell Sea. Geometric figures are caused by a phenomenon known as “finger rafting”, which occurs when two thin ice floes collide. As a result of the collision, the ice blocks slide from above and below each other, resembling a zipper or linked fingers. The brine that emerges from the ice forms a solution that acts as a lubricant. 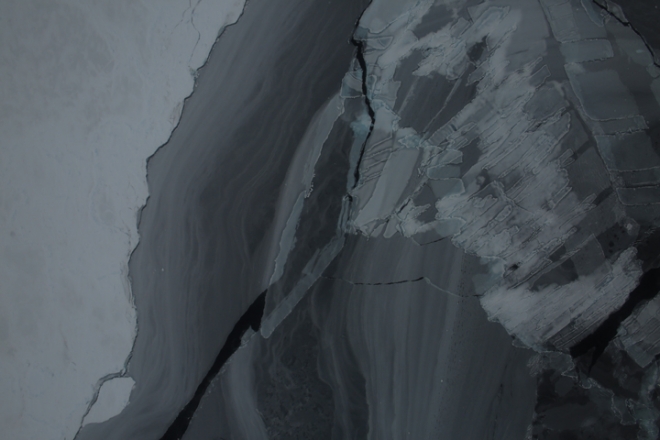 For serrated stratification, it is important that the ice is thin – no more than 20 cm is calculated. If it is slightly thicker, it will lose its flexibility. In the absence of flexibility, colliding thick ice floes can lead to the formation of a large pile – a process known as “ridging”.

“Usually, the stratification is fragmented, several blocks here and there. But it’s so vast. I’ve never seen so much stratification occurring on such a large territory, “said Nathan Kurtz, a scientist at the IceBridge project.

The first photo was taken on November 14 from the window of a NASA research aircraft during the flight in the framework of Operation IceBridge. The second was obtained by a digital mapping system (DMS) installed on the bottom of the aircraft.

The purpose of the flight had nothing to do with the phenomenon of stratification. It was just a lucky coincidence. The team flew to measure the thickness of sea ice. Control of sea ice is important, since it is an air conditioner for the planet, reflecting sunlight and cooling the air temperature.

Kurtz noted that sea ice can be both an indicator of climate change, and its cause. He reacts to the temperature rise by melting, which, in turn, can further increase the temperature. To date, scientists have observed some regional decline in sea ice around Antarctica, but the net effect around the continent appears to be neutral. However, sea ice in the Arctic tells a different story. Satellite observations show that ice in the Arctic Ocean has significantly receded.