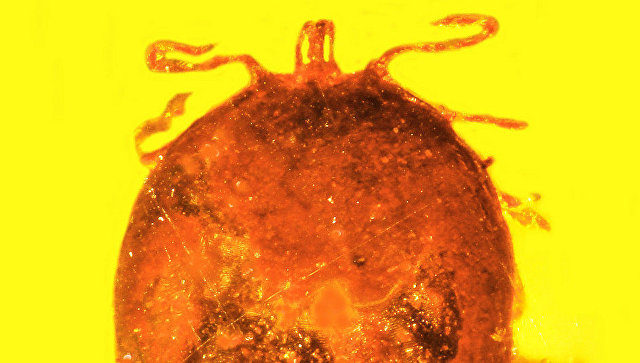 Archaeologists have found a unique piece of amber, which preserved blood drops and parasites of ancient primates living in tropical regions of the Earth about 20-30 million years ago.

“Two small holes in the body of a mite tell us that someone tore it from the body of a mammal whose blood was fed by a parasite and immediately threw it away, causing the mite to get into the hardening resin of the plant.” This behavior corresponds to how they behave Monkeys who, as we know, lived at the time in the future Dominican Republic.The stale blood cells and unicellular babesies in them are a unique historical find for us, “says George Poinar of the University of Oregon in Corva fox (USA).

Poinar and his colleagues have been trying for several years to find traces of the prehistoric past of the Earth in pieces of amber, formed millions of years ago. For example, in early 2015, they managed to find in a piece of amber hallucinogenic fungus, an ergot that turned out to be the same age as the first dinosaurs and first flowering plants, and at the beginning of last year – a flower that had spent 15 million years in amber, as well as a plague bacterium of 20 million years.

Studying the same samples of amber, where a flower and plague bacteria were found that formed on the island of Haiti about 15-20 million years ago, Poynaru and his colleagues again smiled luck – they managed to find the first “living” cells of ancient mammals, one of the first primates, and their parasites living inside and outside their bodies.

According to Poinar, this discovery once again demonstrated that the relationship between many species of animals, including humans and various parasites, stretches for many tens of millions of years into the depths of the history of life on Earth.

According to him, the discovery of these pieces of amber and drops of blood in them confirmed that ixodid mites from the genus Amblyomma parasitize the primates for at least 20-30 million years, and are the main carriers of a number of diseases and other parasites for as long.

Monkeys, cleansing each other’s bodies of mites, were infected, as the scientist explains, Babesia – unicellular parasites, causative agents of the so-called “Texan fever.” In its symptoms, this disease is similar to malaria, but it affects not only humans and primates, but also cattle. Like malaria, Babesia infection can cause a person’s death if left untreated.

“The organisms that we sometimes find in amber can reveal so much new and interesting information about the evolution and history of the diseases that we are fighting today.” This parasite, for example, appeared many millions of years before the first people appeared, and He evolved along with primates and other animals, “continues Poinar.

The study of these pieces of amber, blood samples in them and parasites, as the scientist hopes, will help us to understand when babesias and other unicellular parasites emerged, what role they played in the evolution of mankind and whether it is possible to use this information to fight them today.