The ancestor of the dinosaurs was like a crocodile 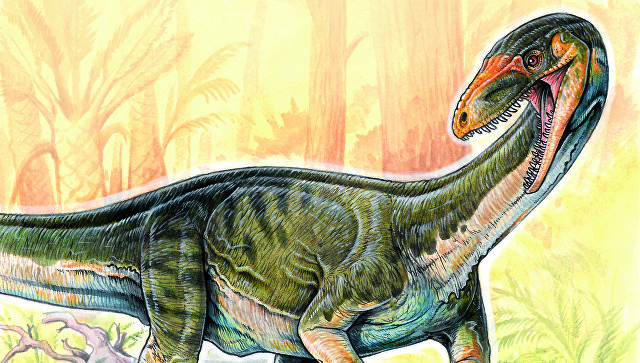 Scientists have found in Tanzania the remains of a likely ancestor of dinosaurs, which was more like a crocodile than the first “real” dinosaurs, eoraptors and other “terror lizards,” the article in the journal Nature said.

“This discovery shows that the first dinosaurs had a lot in common with the first crocodiles, and that the” avian “traits of anatomy did not appear to them right away, as we thought before.” Paleontologists do not like the word “lost link in evolution,” but in this case it is Permissible – Teleocrater connects dinosaurs and their common ancestor with crocodiles, “- said Ken Angelchuk from the Field Museum of Natural History in Chicago (USA).

The problem of chicken, dinosaur and egg

The first dinosaurs, as paleontologists now believe, appeared at the end of the Triassic period – about 240 million years ago, after the disappearance of all the large animal monsters that dominated the Earth in the Permian period. The main competitors of dinosaurs for the “crown” of the most successful animals on Earth were crocodiles, which at that time were of gigantic size and lived not only in water bodies, but also on land.

Both crocodiles and dinosaurs are close relatives, whose ancestors were divided, according to scientists, in the middle of the Triassic period. As and when this happened, paleontologists do not yet know, since the fossils of this time are quite rare.

On the other hand, most scientists believed that they “dispersed” fairly quickly, since the oldest dinosaurs do not look like crocodiles – they had long, flexible necks, could walk on two legs and their legs were adapted for fast running.

Angelchuk and his colleagues discovered that in fact the first ancestors of dinosaurs were more like crocodiles than their nearest descendants, studying the rocks of the middle of the Triassic that formed in the south of Tanzania in the vicinity of the Ruhuhu river.

Here, paleontologists discovered the remains of a three-meter creature, unlike eoraptors (the first dinosaurs that lived in Argentina 230 million years ago), or the Nyasazaurs found by the authors of the article in Tanzania in 2012, nor on other dinosaurs and their ancient relatives. In general, we can say that it was not similar to any ancient reptile or their modern descendants.

This animal, according to Angelchuk, was more like a lizard or a “bad” crocodile with unusually long legs and neck than a dinosaur – it moved on four legs and had primitive joints that did not allow it to run fast, and also had a number of other features Ancient and modern reptiles. 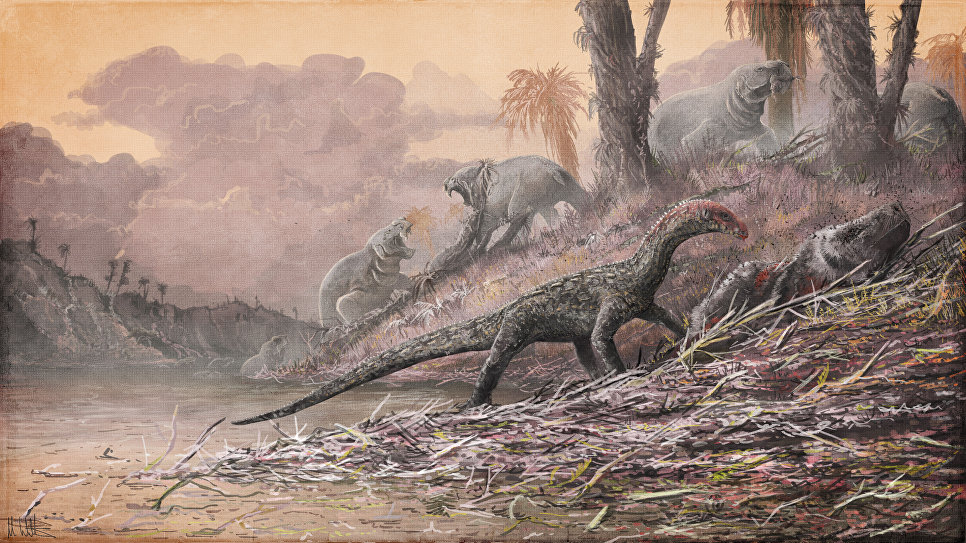 So the artist imagined the ancestor of all the dinosaurs, Teleocrater rhadinus, eating the remains of the beastworm

Nevertheless, the creature was a dinosaur, since the general structure of his anatomy was closer to the “terror lizards”. For example, their cervical ribs were longer than other bones of a similar type, and they also had a unique shape, not characteristic of crocodiles. In addition, this mysterious creature had dinosaur jaws and unusual for crocodiles front paws.

Scientists have called this bizarre creature Teleocrater rhadinus, which means “a thin animal with closed basins of the pelvis,” which indicates the inability of these creatures to run as fast as dinosaurs.

As is often the case in paleontology, Teleocrater rhadinus was in fact discovered much earlier, in the mid-1950s, when British paleontologist Alan Charig studied the fossils found by his team in Tanzania in the 1930s. He did not attach importance to these bizarre remains and did not see in them the ancestor of all dinosaurs, since the remains they found were not complete.

Anghelchuk and his colleagues corrected the error of Charig, calling his find the name that was invented for her by their British predecessor. According to scientists, the discovery of Teleocrater rhadinus completely reverses the history of the evolution of birds, dinosaurs and crocodiles and closes a major gap in the history of their emergence, which scientists have argued for several decades.