The ancestors of the Sumerians lived in Transylvania? 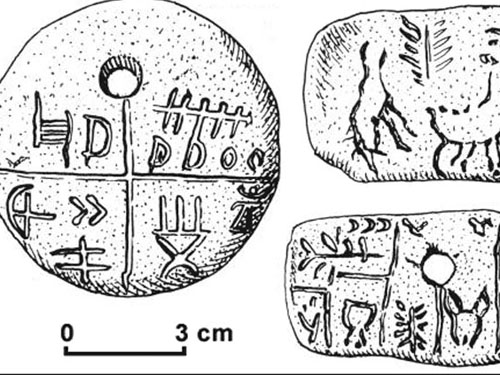 In 1961, the scientific world got the news about an archaeological sensation. No, the thunder of the great discoveries came not from Egypt or Mesopotamia. An unexpected discovery was found in Transylvania, in a small Romanian village Carterii.

What has surprised scientists?

About 20 km. from Carterii is the hill of Turds. In its bowels buried the ancient settlement of farmers in the Neolithic period. The hill was excavated since the late NINETEENTH century, but did not completely excavated. Even then, the attention of archaeologists drew pictographic signs incised on the fragments of the vessels.

Those markings on the shards found in a related Turdas Neolithic settlement of Vinca in Yugoslavia. Then, scientists have found signs for the simple mark of the owners of the vessels. Then totalscore the hill out of luck: the stream, changing its course, almost washed it. In 1961, archaeologists have already appeared on the hill Carterii.

The work of scientists was coming to an end… And suddenly under the bottom layer of the hill was found a pit filled with ash. On the bottom of the statues of the ancient gods, a bracelet made of sea shells… and three little clay tablets, covered with pictographic signs. Next found dismembered and burnt bones of an adult.

When the excitement had subsided, the researchers carefully examined the small plates. Two had a rectangular shape, and the third was round. The circular and rectangular plates in the center was a round through hole. Careful studies have shown that plates are made of local clay. The marks were struck on only one side.

Writing technique of the ancient terterian was very simple: patterning the signs were scratched with a sharp object on the wet clay, then the plate was annealed. These signs came in all excited.

Because they were patterned full of mysterious characters, strikingly reminiscent (as noted already the author of an outstanding opening, the Romanian archaeologist N. Vlassa) Sumerian pictographic writing of the end of IV Millennium BC.

If such signs in distant Mesopotamia, and wouldn’t be surprised. But the Sumerian tablets in Transylvania! It boggled the imagination.

But archaeologists were in for another surprise. Found the plate was a thousand years older than Sumerian! Could only wonder: how nearly seven thousand years ago, far beyond the famous ancient Eastern civilizations, where it absolutely was not expecting, he found himself the oldest (on this day) in the history of mankind the letter?

In 1965 the German sumerology Adam Falkenstein suggested that writing originated in Carterii under the influence of Sumer. He said the M. S. hood, proving that carteresque plates generally have no relationship to writing.

He argued that the Sumerian merchants once visited Transylvania, here is something plaques were copied by the natives. Of course, the meaning of the signs clear to tartaricum was not, however, this did not prevent them to use in their religious ceremonies.

There is no dispute, the idea of Huda and Falkenstein original, however there are also weaknesses. How to explain the gap in one thousand years between the appearance of charteristic and Sumerian tablets? And is it possible to copy something that does not exist yet? Other commentators have linked the terceristas writing with Crete, but here the failure time of up to two millennia.

And what signs? On the first – rectangular – inflicted symbolic image of two goats. Between them is placed the ear. Perhaps the image of goats and spike was the symbol of the welfare of the community, which was the occupation of farming and animal husbandry? Maybe this is a hunting scene, according to N. Vlas? Interestingly, a similar story is found in the Sumerian tablets.

A second plate separated by vertical and horizontal lines on small plots. Each of them scratched various symbolic images. Not the totems?

By the way, the circle of Sumerian totems known. And if you compare the pictures on the Transylvanian plate with the images on ritual vessel, found in excavations at Jemdet – Nasr, again struck by an amazing coincidence.

The first sign on the Sumerian sign is animal head, probably a goat, the second depicts Scorpio, the third, apparently, – the head of a man or deity, symbolized by the fish, the fourth, the fifth sign – any structure, sixth – bird.

Totems terceristas plates coincide with the Sumerian, but are in the same sequence. What is this, another striking coincidence? Probably not. The graphical coincidence of the signs could be accidental, the science of such a coincidence is known.

Strikingly similar, for example, individual signs of the mysterious writing of the Indus civilization Mohenjo-Daro and Harappa with characters kohau-rongo-rongo far Easter island.

But the coincidence of totems and their sequence is hardly a coincidence. It suggests the origin of the religious views of residents and Carterii and Jemdet-Nasr from one common root.

Probably in the hands of researchers is kind of the key to the decipherment of writing Carterii: not knowing what is written, they already knew the sequence in which they should read. Therefore, the message can be decrypted, reading counterclockwise around the hole in the plate.

Of course, we will never know how the language sounded inhabitants Carterii, but we can set the value of their patterning characters, based on the Sumerian equivalents.

Russian expert sumerologist A. Kifishin, analyzing gathered material, I came to the conclusion: Carteresque signs – the shard widespread writing systems of local origin; the text of one of the plaques lists the six ancient totems, coinciding with the “list” from the Sumerian city of Jemdet-Nasr, and with the seal of the burials of the Hungarian körös culture; the signs on the plaque should read around the circle counter-clockwise; the content of the inscription (if it is read in Sumerki) is confirmed by the discovery in the same Carterii dismembered corpse of a man; the name of the local God Saue identical to the Sumerian God USMU. This plate was translated as: “In the reign of the fortieth to the mouth of the God Saue elder ritual burned. This is the tenth.

On a round plaque incised, written symbols, separated by lines. The number in each square is small. So, writing charteristic plates as archaic Sumerian writing was ideographic, syllabic signs and grammatical indicators did not exist. If you apply the method Kifisia, the translation of the inscription reads: “Four rulers of the face of God Saue the elder mind burned deep one”.

What is the meaning of the inscription? Again begs comparison with the aforementioned us document from Jemdet-Nasr. It contains a list of the main sisters of the priestesses, who led four tribal groups. Maybe the same priestess-Princess were in Carterii?

But there is another coincidence. In the inscription from Carterii mentioned God Saue, and the name of God is depicted similarly, as the Sumerians. Yes, apparently, carterista plate contained brief information about the ritual burning of a priest, who served a certain period of his reign.

So who were the ancient inhabitants Carterii who wrote “sumarski” in the V Millennium BC, when the Sumerians and still there was no trace?! The ancestors of the Sumerians? Some scientists believe that the prosumer split from packetflow in the XV-XII century BC, after retiring from Georgia to Kurdistan. How could they pass their writing to the peoples of South – Eastern Europe? The issue is important. And the answer to it yet.

When a little subsided, the excitement associated with signs, remembered and forgotten signs on the shards of Turds-Vinci. Compared them with carteresque: the resemblance was obvious.

And that says a lot. Writing Carterii did not arise in a vacuum, but were an integral part of the common in the mid-sixth – early fifth Millennium BC pictographic writing Balkan culture Vinci.

Of particular interest is the large ritual vessels, belonging to the early period finansai culture. On it we see a figure, probably the appearance of the sanctuary, and the image is again very similar to the sanctuary of the ancient Sumerians. Again, coincidence? But two of the sanctuary are separated from each other for almost twenty centuries!

It turned out that the ancient inhabitants of the Balkans had a significant impact on the culture of Asia Minor. Especially well traced in touch with her culture of Turds-Vinci by pictographic signs on ceramics.

Signs, sometimes completely identical wineskin, were found in legendary Troy (the beginning of III thousand BC). Then they appear in other parts of Asia Minor. Distant echoes of writing Vinci contains a pictographic writing system of ancient Crete.

We can not agree with the proposal of archaeologist V. Titov that the primitive writing of the Aegean countries is rooted in the Balkan fourth Millennium BC, and not emerged under the influence of distant Mesopotamia, as earlier believed some researchers.

It is also known: the creators of the Balkan culture Vinci in V thousand BC broke through Asia Minor to Kurdistan and Khuzestan, where at that time settled just prosumer. And soon in the area occurs protalinski pictographic writing, equally close to both Sumerian and to carteresque.

So, the inventors of Sumerian writing, the Sumerians? Indeed, how else to explain that the oldest writing in Sumer, Dating from the late fourth Millennium BC, appeared suddenly and in a fully developed form? This paradox has drawn the attention of all the abstracts.

The study of the laws of internal development of Sumerian pictographs, shows that by the end of IV thousand BC pictographic writing as the system was in a state of no formation and decay.

Out of all the Sumerian system of writing (containing about 38 thousand characters and variations) were used slightly more than 5 thousand, and they all went out of the 72 ancient nests of symbols. The process of polyfonische (i.e. rasnoveanu of the same sign) nests Sumerian system began long before that.

Polyfonische gradually corroded outer shell complex character in the entire nests, then destroying the interior of the sign in the nests paurashavas and finally completely destroyed the nest.

Broke up the nest-symbols on polyphonic bundles long before the arrival of the Sumerians in Mesopotamia. Interestingly, in protalinski writing that existed simultaneously with the Sumerian also on the Persian Gulf, there is a similar phenomenon.

The conclusion is clear: the Sumerians (and Babylonians) were only good students, taking pictographic writing from the Balkan peoples and to further develop it in cuneiform.

But what is still fraught with carteresque plates? A direct answer yet. But it is clear: only the study of the whole complex of monuments of culture of Turds-Vinci, which includes Tartare, can bring us closer to solving the mystery of the three clay tablets.