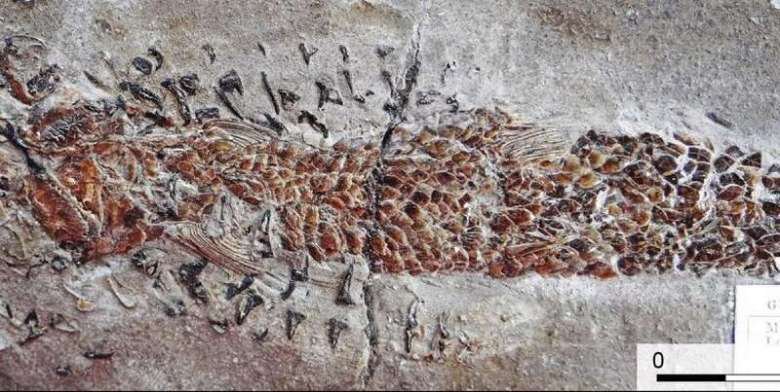 Scientists from Plymouth and Kansas universities, as well as The Forge Fossils, a Dorset-based company, described a fossil of about 200 million years old, which is a rare paleobiological event – a squid-like creature attacking a fish.

The fossil was found back in the 19th century in the south of England and is currently stored in the collections of the British Geological Survey in Nottingham. Scientists were able to determine that this sample is not a superposition of one fossil on another, but actually a perfect attack of the “squid” Clarkeiteuthis montefiorei on Dorsetichthys bechei fish, reminiscent of modern herring. The squid managed to catch the prey and started to eat it, but the fish, as indicated by the location of its bones inside the mouth of Clarkeiteuthis, was too big for him. As a result, the squid with the stuck fish sank to the bottom, where it died.

“This is the most unusual, if not exceptional, fossil, since predatory phenomena are extremely rare in geological records. This indicates a particularly violent attack that ultimately led to the death and subsequent petrification of both animals, ”says Malcolm Hart, lead author of the study.

According to another version, Clarkeiteuthis, having sunk to the bottom, tried to hide from other predators, but fell into water with a low oxygen content and suffocated. The authors of the work believe that this incident occurred from 199 to 190 million years ago.

A fossil was found in the county of Dorset, where the rocks that formed at the beginning of the Jurassic occur. At that time, almost the entire territory of modern Britain was a shallow bottom of the ancient Tethys Ocean, the remains of whose inhabitants are often found in sedimentary Cretaceous sediments.