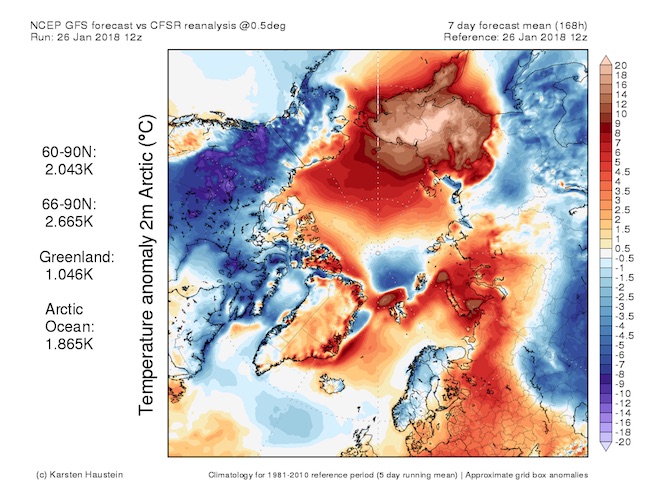 In the Arctic, you will not find those who deny climate change. From Sitka in Alaska to Spitsbergen in Norway, people live in a period of extraordinarily rapid climatic changes that affect their lives.

Alaska has just survived the warmest December of all history. The average temperature anomaly throughout the state is staggering – 15.7 degrees Fahrenheit above normal. In a huge part of the state, almost equal in size to California, Washington and Oregon, the temperature was 20 degrees Fahrenheit above the average for December because of the strong high pressure area that had affected Alaska all month.

It is expected that Alaska will survive another unusually strong warming in early mid-February, as the giant high-pressure ridge will arrive in the state from the north of the Pacific Ocean. Circulating clockwise around this area will cool some parts of Alaska, but will warm other areas – especially in the west of the state.

The absence of colds in Alaska, where people, natural systems and the economy need them, has far-reaching consequences, experts say. For example, the creation and maintenance of dense ice and snow cover is important for transportation of vehicles across the state, 90% of whose territory do not have roads. When people from rural areas have to go somewhere, they usually use snowmobiles and cross rivers that need to be frozen reliably.

This year the ice froze late, remained thin, easily melted due to a lack of snow cover. This had tragic consequences, including the death of travelers in the last two months.

The climate of Alaska, where the typical winter daytime temperature is -34.5 degrees Celsius, helps maintain deep permafrost. Now the permafrost melts and throws out a considerable amount of gases, including carbon dioxide and methane. This accelerates global warming, creating a so-called positive feedback loop.

Days of fierce cold are necessary to preserve permafrost and the growth of certain plant species. As the average temperature in the state grows, whole ecosystems shift northward.

Permafrost is the reason that schoolchildren in Alaska go to school in the cold, and houses remain in warm weather. With warming, melting snow and rain freeze instantly, in contact with permafrost. The roads covered with snow turn into skating rinks. In Fairbanks, rain has never been heard in the winter, but in the last few years, including 2018, such weather has been seen more than once.

One of the culprits of the unusually warm December and the part of January is a record low level of sea ice in the Bering and Chukchi seas along the south-western and northern coast of Alaska.

The absence of sea ice means that the air moved from the southwest, west and northwest to Alaska was warmer than it would be otherwise, since the sea ice cover tends to cool the air above it more than the open ocean.

In Utkjavik, which goes to the Chukchi Sea in the extreme north of Alaska, the temperature was above the record high for 87 consecutive days from October 26, 2017 to January 21, 2018.

Warming has affected every part of the state in different periods of this winter. For example, on January 14, long-term temperature records were updated in the southeast of Alaska. The rest of the state also experienced a temperature above average.

In Metlakatl, which is located in the National Forest of Tongass in the southeast of Alaska, the thermometer’s thermometer reached 18 degrees Celsius, which was the highest temperature ever recorded in the state in January.

This winter is anomalous not only in Alaska, but throughout the Arctic, which is heated almost twice as fast as the rest of the globe.

On Svalbard in Norway, which extends to the Atlantic side of the Arctic, the average temperature was 9.3 degrees Celsius above the average for the last 30 days. The area of ​​sea ice in Svalbard also reached the second lowest level, which poses a threat to polar bears and other wild animals that sea ice needs to hunt for prey.

The area of ​​Arctic ice in the vast Arctic Ocean reached a record low level for this time of year and possibly set a new anti-record. Studies have shown that the area and rate of loss of Arctic ice has become unprecedented in the last 1.5 thousand years and that these trends are directly related to the increase in the volume of greenhouse gases in the air due to the combustion of fossil fuels.

Weather patterns over the next few weeks may continue to hamper the growth of ice, possibly keeping the ice cover at a record low, as unusually warm air will repeatedly flood the Arctic from the Pacific side.