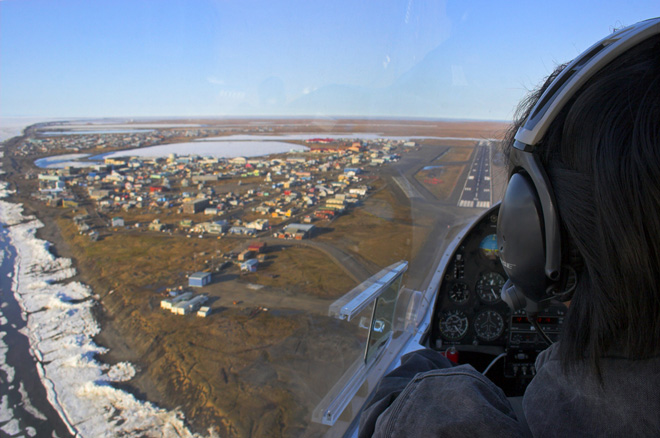 At 514 km north of the Arctic Circle, the weather station in the northernmost city of America, Utquiagwick (formerly Barrow) in Alaska calmly collects temperature data since the 1920s.

Earlier this month, preparing for a report on the US climate, experts from the National Environmental Information Centers noticed something strange: they did not have enough data from Utquiyagvik for the entire 2017 and part of 2016.

It turned out that the temperature recorded during this period was higher than ever before. So much above that an automated computer system, installed to manage data and remove inconsistencies, marked the temperature data as unrealistic and excluded them from the report.

Here’s how Dick Arndt, head of the Climate Monitoring Service of the National Oceanic and Atmospheric Research Administration, explained this event: “This is a sign of rapid climate change in the Arctic and next to it, the average temperature in Utquiyagwick has changed so rapidly that an algorithm designed to detect artificial changes in the toolbox or the station environment. Thus, the information was excluded from the temperature analysis of Alaska, and the north of the state was a bit colder on paper than it really was. ”

In the subsequent careful analysis of how this could happen, Arndt explained that the exact location of the weather station, the temperature recording equipment and the basic procedures were sometimes changed, which led to variations in the data. Scientists have developed an algorithm that filters noise and notifies scientists if something – for example, a broken sensor – needs to be checked.

Since 1979, when the first-year sea ice began to monitor the satellite, the average temperature in Utqviyagvik from January to September rose by 1.9 degrees Fahrenheit. This is 2 times higher than in the lower 48 states.

In October, November and December, the temperature rose sharply with a difference of 7.8, 6.9 and 4.7 degrees Fahrenheit, respectively, Arndt said.

The high temperature means that the volume of Arctic ice in the region has significantly decreased, which led to even more warming. And since this vicious circle – from the heat to the decrease in the volume of ice and again to a rise in temperature and even greater ice loss – was repeated, the weather station in Utkviyagvik did that. that she had to do: she decided that something had broken down.

But it turned out that not the station but the climate came out of operation.

The case in Utqviyagvik is an appalling glimpse of the future of the rest of the world. In the 2010 description of a distant village and its surrounding environment, the Smithsonian Institute concluded that the locality is the “zero mark of climate change”.