The army of microbots can build anything

SRI International has developed a robotic hive from insect-like machines capable of creating virtually any structure. These robots in the future will serve industry, medicine and even small businesses.

Company SRI International, based in the Silicon Valley, has created an amazing robotic complex MicroFactory. It is a station that looks like a real “hive” and is intended for insect-like machines – microbots. Their main task is to create almost any three-dimensional design: perhaps a 3D printer of the future will not be a printer in the classical sense, but instead will become a horde of tiny robots working together on a single task.

The basis of the MicroFactory is the magnetic field generated by the printed circuit board. Special software controls the field, moving in the space of miniature bots, which in themselves are magnets. As part of the team, each robot performs a special program with the help of the so-called “effector”, a tool designed to manipulate objects and substances in the surrounding space. What exactly the effector does and how the bot behaves depends on the specific task assigned to the swarm at the current moment.

The design of the robotic complex, as it is not difficult to guess, was inspired by the ant colonies, where each individual performs his task, ultimately aimed at achieving a common goal.

The SRI micro robots and the platform on which they are based are also able to integrate with the DARPA Open Manufacturing program, which allows the creation of new products in a wide range of production verticals. Robots can collect almost anything, regardless of the size and complexity of objects. More importantly, they are able to do this quickly – most such prototypes suffer primarily from the lack of speed, which makes their use practically unprofitable. SRI microbots also differ from similar projects and more traditional automated systems in that they have practically no mobility restrictions: if you mount a magnetized assembly surface onto a movable mechanism, the whole complex can be moved as conveniently to the manufacturer. In practice, this makes bots literally a universal tool that can perform not only laboratory, but also practical tasks in real production conditions.

The use of microbots

As an example, WIRED describes the process of how a cohesive action of robots allows you to create something simple, like a lattice. “One group of bots keeps high-strength carbon rods vertically, the other – horizontally, and the third glues the construction together. Working together, robots can work without interruptions: if in some part of the construction a malfunction occurs, or materials and glue come to an end, the groups simply reorganize in an optimal way and continue to carry out the task. ”

But what is the advantage over existing and very practical 3D printers? The main bonus is that robots can use any materials and components, as well as to assemble more complex devices from simple electronic components. And if you combine equipment for 3D printing with an army of microbots, the process will go even faster. 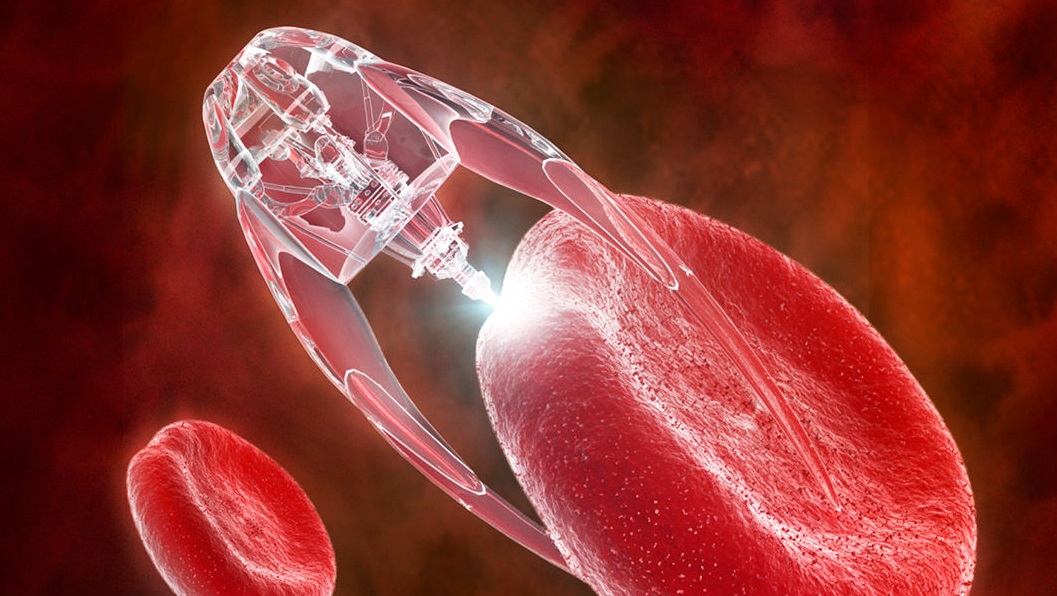 Although SRI microbots are the last word of robotics, the appearance of machines is expected to be much smaller in the near future. It’s about medical nanobots, the creation of prototypes of which companies are engaged all over the world. These tiny mechanisms are designed to work in an environment where they will be influenced by Brownian forces – random effects caused by the movement of molecules in the surrounding fluid. Therefore, they need a delicate, but at the same time, effective control mechanism, and a magnetic field is suitable for this as well as possible. In a recent study, researchers at Duke University used magnets to allow the microbots to play the role of tweezers to capture single yeast cells. This clearly demonstrates the potential of such technologies, which in the future will also be able to “dismantle” the tumor parts and track pathogens in the patient’s body in the future.

But the robots SRI, apparently, in the future can be made available not only for large high-tech enterprises, but also for small businesses. They are convenient to use, small and can be produced in large batches, which greatly diversifies the already considerable opportunities of domestic technologies.