The asteroid that destroyed the dinosaurs fell at the deadliest angle 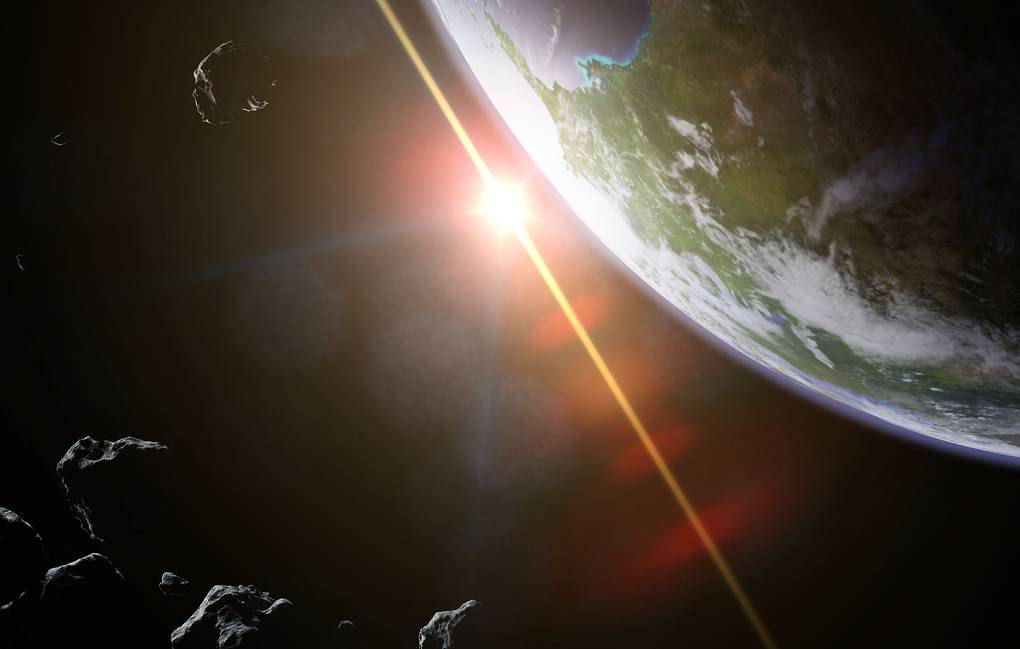 Underwater work at the bottom of the Gulf of Mexico helped geologists find out that a giant asteroid, which destroyed the flora and fauna of the Mesozoic era, fell to Earth at a very large angle. This made the consequences of his fall as devastating as possible. The results of the study were published by the scientific journal Nature Communications.

“Our calculations show that the asteroid fell at a very steep angle, about 60 ° to the horizon, moving towards the Earth from the north-east. This is the most dangerous scenario of the fall, as a result of the maximum amount of dust entering the atmosphere. It scattered all over the planet which led to the onset of a full-fledged “nuclear winter”, – said one of the authors of the work, a geologist from Imperial College London Gareth Collins.

At the end of the Cretaceous, about 65.5-66 million years ago, an asteroid with a diameter of about 10-15 kilometers fell to Earth. He left the gigantic three hundred kilometer crater of Chicxulub in southern Mexico. Scientists have no doubt that he really fell, but what role he played in the extinction of dinosaurs and marine reptiles remains a matter of debate.

In particular, three decades ago, the American paleontologist Mark Richards suggested that ancient dinosaurs became extinct due to massive outpourings of magma and volcanic eruptions at the site of the modern Deccan Plateau in India. They occurred either at the same time that the asteroid fell, or preceded it, giving rise to a powerful greenhouse effect and filling the atmosphere and waters of the ocean with a huge amount of sulfur compounds, extremely corrosive and toxic substances.

More recently, many geologists and paleontologists have begun to suggest that both of these events could be interrelated. The fall of the asteroid could have a special effect on the bowels of the earth and the structure of the earth’s crust, which could provoke volcanic eruptions on the Deccan plateau and on the ocean floor, in the vicinity of the mid-ocean ridges.

The end of the dinosaur era

Collins and his colleagues learned new details about how this cataclysm occurred. They worked at the bottom of the Gulf of Mexico – there are preserved rocks that formed at the time of the formation of the Chicxulub crater. Studying over the past four years the chemical composition and structure of these minerals, as well as the shape of the funnel itself, geologists hope to understand how exactly the asteroid fell.

Using this data, geologists have created an accurate three-dimensional model of the crater. Based on it, the researchers tried to reproduce the crater, pushing the virtual Earth with asteroids of different sizes, masses and compositions, as well as changing the angle and direction of their fall.

As it turned out, the realistic depth of Chiksulub, the height of the elevation in its center, as well as the nature of the compression of rocks inside it, could be reproduced only if the asteroid fell almost vertically to the Earth’s surface, moving towards the north-eastern edge of the crater.

A similar scenario of this catastrophe, according to researchers, was the most unfortunate for all life on Earth at that time. According to scientists, if an asteroid fell to the Earth at an angle of 15 °, the amount of dust, carbon dioxide and sulfur compounds released would be about three times less, and if it fell vertically – an order of magnitude less.

Further study of crater rocks, as geologists hope, will help them calculate the exact number of rocks that the asteroid’s vapor has vaporized. Thanks to this, it will be possible to evaluate its mass, as well as many other properties of this celestial body. This, in turn, will help to understand how craters arise on other planets, and also to evaluate whether such an event can happen in the foreseeable future.