The being capable to grow up a new brain 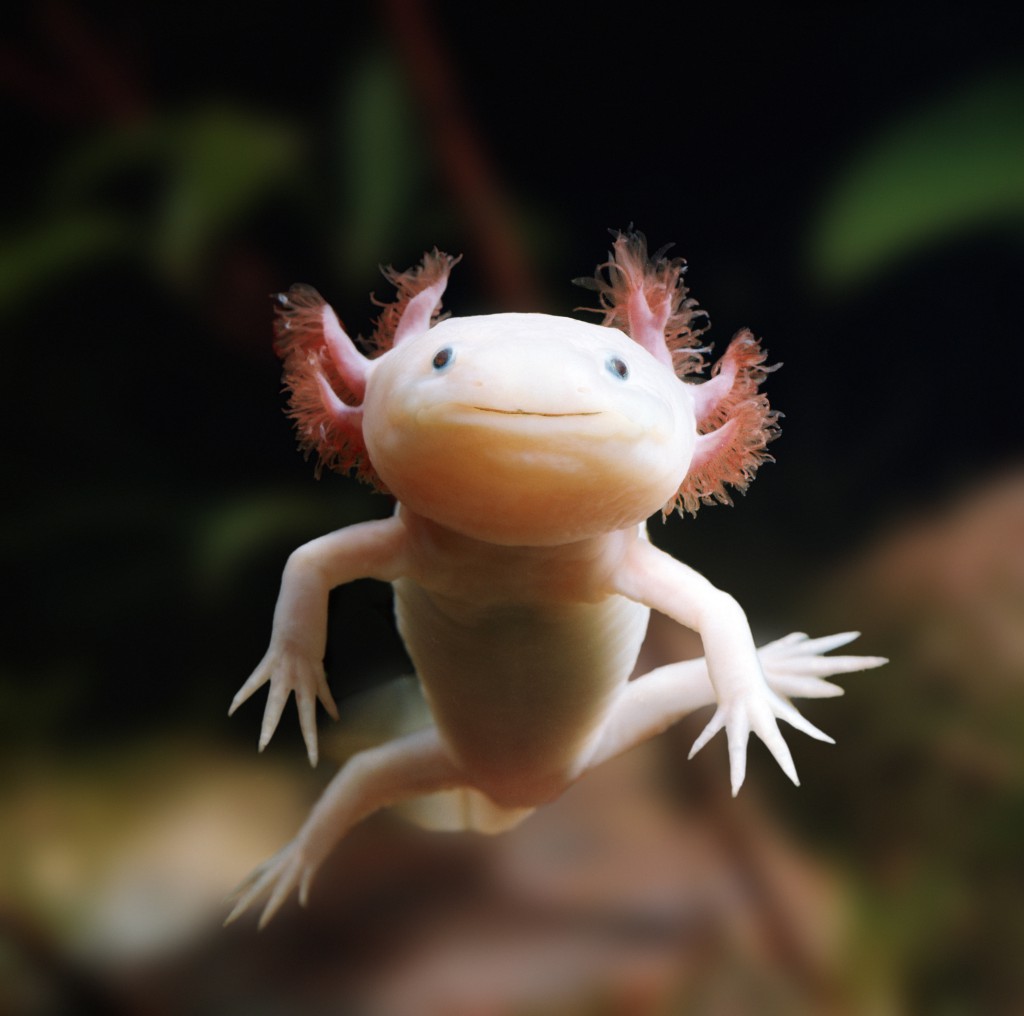 The axolotl as it was established by scientists, is a larva of the Mexican ambistoma. Ambystomatidae, family of amphibians having a tail. Ambystomatidae — an overland animal, externally similar to a large salamander, but more modest coloring.

The axolotl has a fantastic ability to let grow the lost organs.

We, of course, know also other animals who can let grow new tails or paws, but to all of them to an axolotl very much far: he is able to restore completely not only extremities, but also eyes, jaws, heart. And at last is the only vertebrate who can grow anew the damaged fragments of the brain. 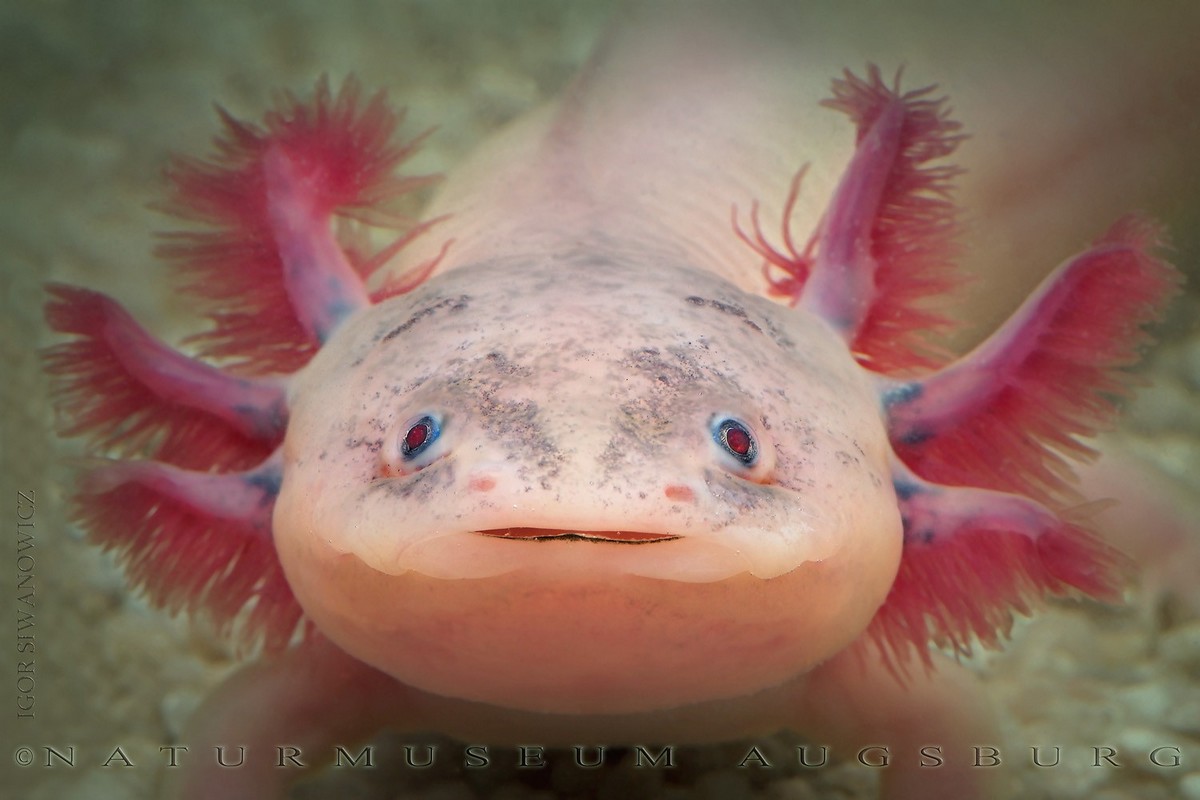 Researchers from Broud’s (Broad Institute of MIT and Harvard) Institute found out that partially blasted паллиум (a part of a forebrain which at the person forms a cortex of larger hemispheres) an axolotl it is capable to form all types of neurones which were in it before damage. It means that again created tissue of a brain of an amphibian can give the same signals that were in its arsenal to wound. However there are also restrictions: axons (long processes of neurones) binding паллиум to other parts of a brain at neogenesis at axolotls are formed rather badly. Work is published in the eLife magazine.

Earlier it was already known that larvas of salamanders — axolotls — can let grow not only the lost extremities, but also some more exotic parts of a body — for example, sites of a brain. However it wasn’t clear, how correctly at the same time there is a neogenesis. For nervous tissue important not only number and a ratio of various types of cells, but also an order of their communications with each other. That to define it, the American neurobiologists used electrophysiology methods, and also the stains changing color of neurones how often they send signals of a certain intensity. 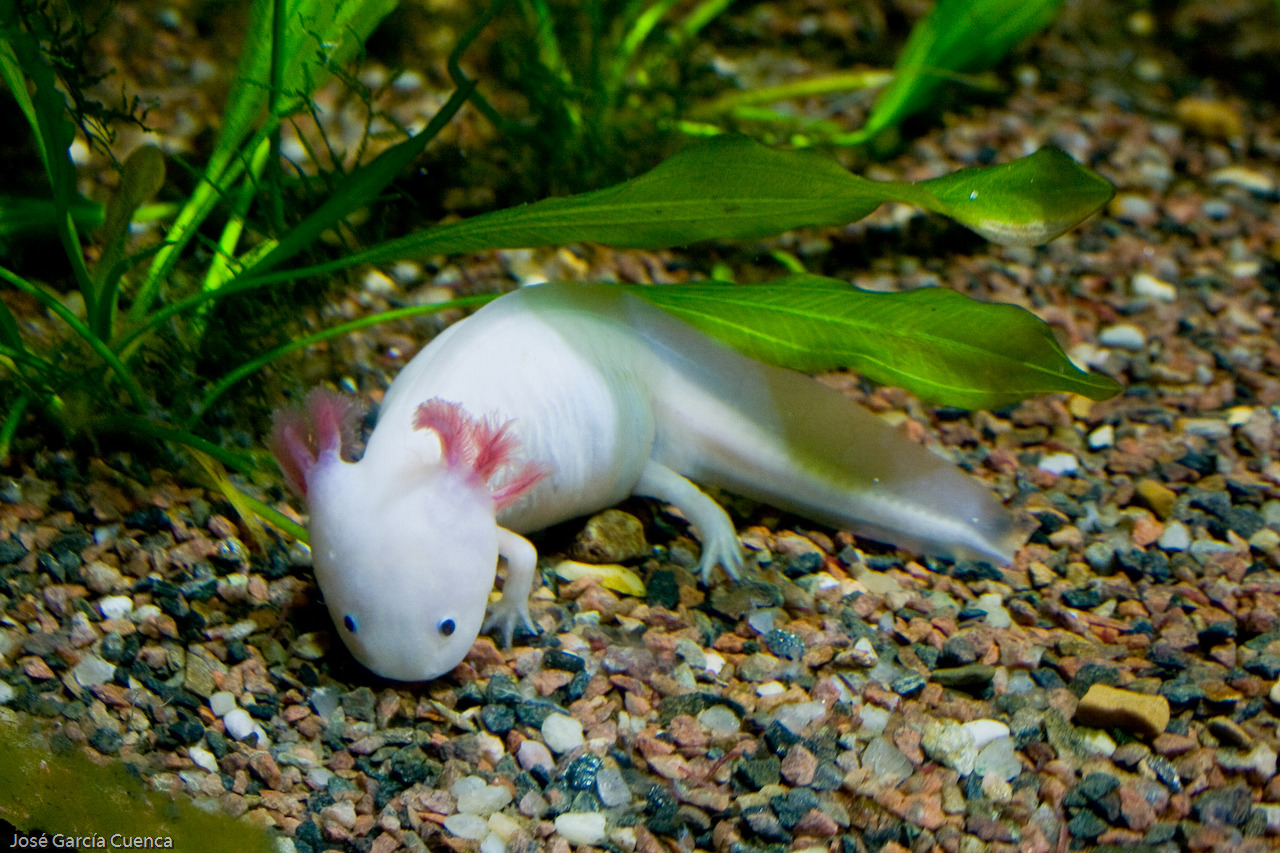 Authors assume that ability of an axolotl to regenerate various types of neurones is bound to its larval state. Salamanders can live in a form of an axolotl to death and at the same time are capable to reproduction (reproduction at a stage of a larva is called a neoteniya). Nevertheless when performing certain conditions (for example, at addition of an iodine in water) the axolotl at any age can turn into an adult salamander. It means that all cells of his body are constantly ready to a metamorphosis. Roughly speaking, they on properties are rather close to stem cells.

As for problems with restoration of long processes, researchers consider that here it isn’t disability of new neurones to form axons, and in lack of the corresponding signals from surrounding nervous tissue. At an embryonal development the destiny of each cell is defined by alarm substances which are emitted by her neighbors — other developing cells. Neurones of a brain of an adult axolotl of such substances don’t form therefore the new come cells don’t understand” where to refer axons. However if to add such substances to a tissue, new axons for certain it will be possible to grow. 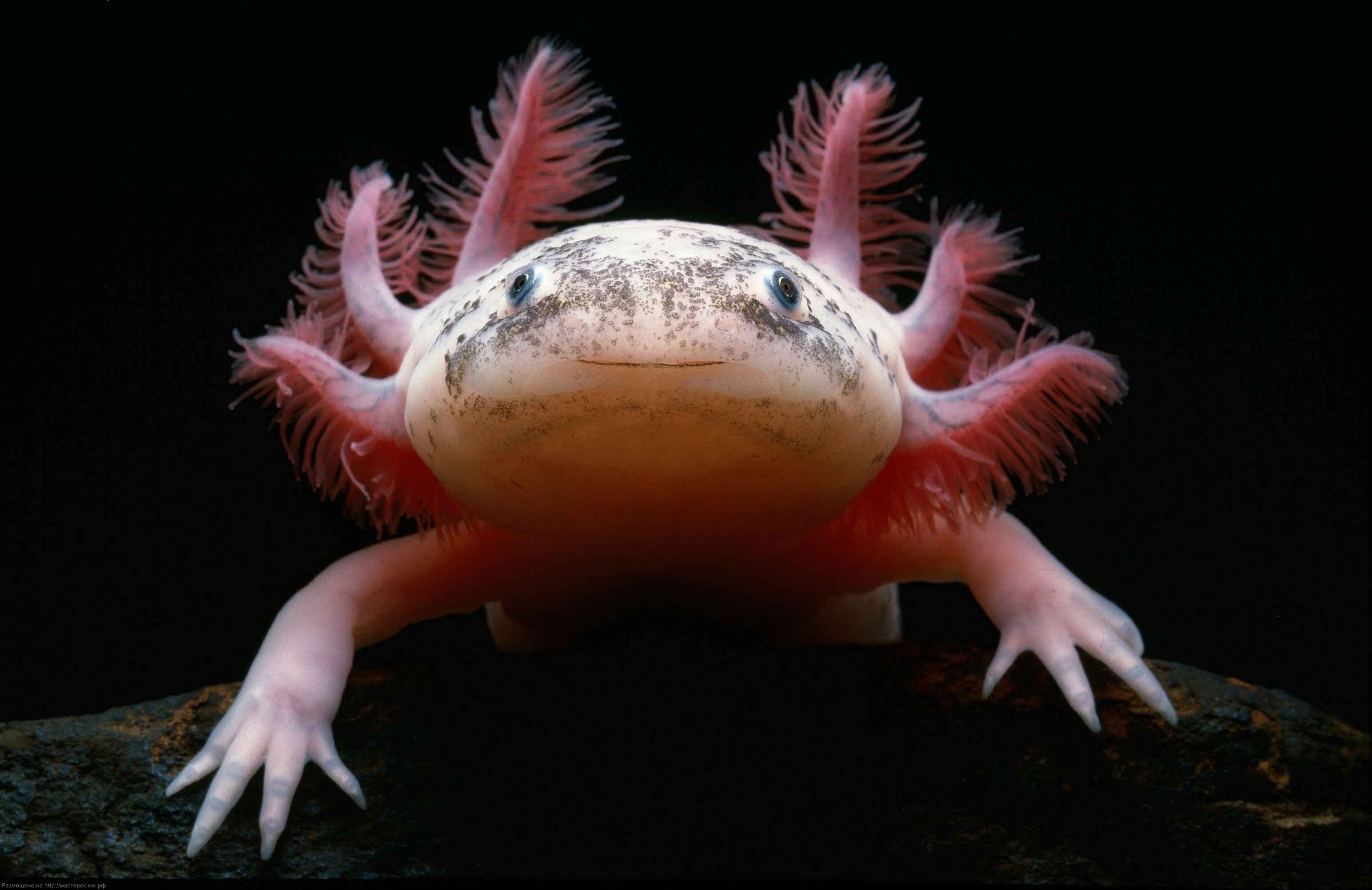 The neogenesis mechanism salamanders of the lost extremities has nothing in common with action of stem cells, scientists found out.

Ability of these amphibiouses having a tail to let grow itself paws, lungs, brain concerned mankind throughout the millennia – it was studied by Aristotle, Voltaire, Darwin.

When the animal loses a part of a body, skin blanket cells quickly cover a wound with a so-called epithelial cover, fibroblasts break links with a connecting tissue and form a blastema of which the new extremity is formed on the place of a wound. For example, on a new paw only three weeks leave.

At the end of the 20th century scientists assumed that cells of salamanders are similar on stem, that is can turn into any organ.
Martin Kragl from the German Max Planck Institute found out that it not so. Together with the American colleagues he investigated as the Mexican salamander an axolotl of Ambystoma mexicanum lets grow herself an extremity and a tissue. Kragl used opening of staff of the University of California who proved that cells of a blastema of salamanders are similar to cells in the developing extremities of embryos of mammals which are capable to update the extremities, however lose these skills before birth. 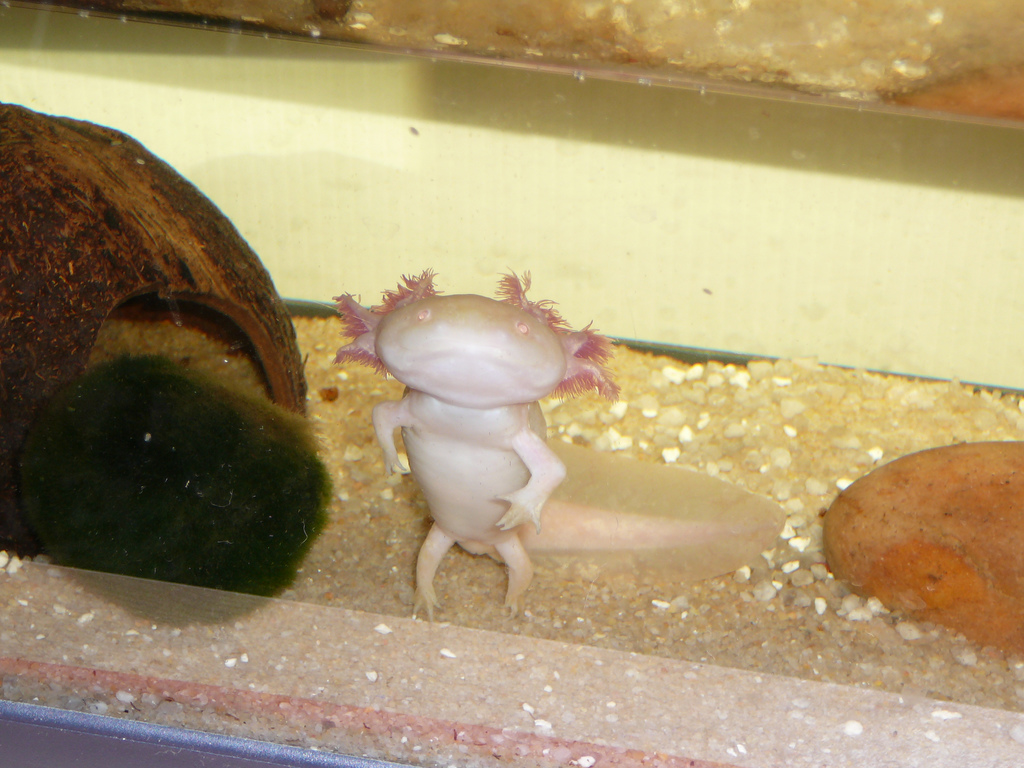 Proceeding from the idea that development of extremities from a blastema practically repeats their natural development in the growing beings in a short look, the German and American scientists divided animals into two groups. The first entered GFP protein received from a fluorescent jellyfish. In ultraviolet this protein highlights cells in green color that allows scientists to track a parentage of various cells and their reserving. Both adult axolotls, and larvas entered into the second group. To them scientists entered the cells with a protein taken from gene-modified individuals. To larvas substance stuck there, from where, as biologists knew, various tissues and organs, in particular a nervous system had to grow. To adult individuals at first entered cells with a protein, and then cut off from a body on a piece.

Most visually this process was observed at larvas: stuck in the area from where the nervous system had to grow, the cells illuminated green extended on the growing axolotl in accuracy according to the scheme of a nervous system.

“Most likely, cells near the amputated organ will be reprogrammed that allows them to start fetal programs of formation of tissues irrevocably to an initial pluripotential cell”, – researchers in article published in the prestigious magazine Nature noted. 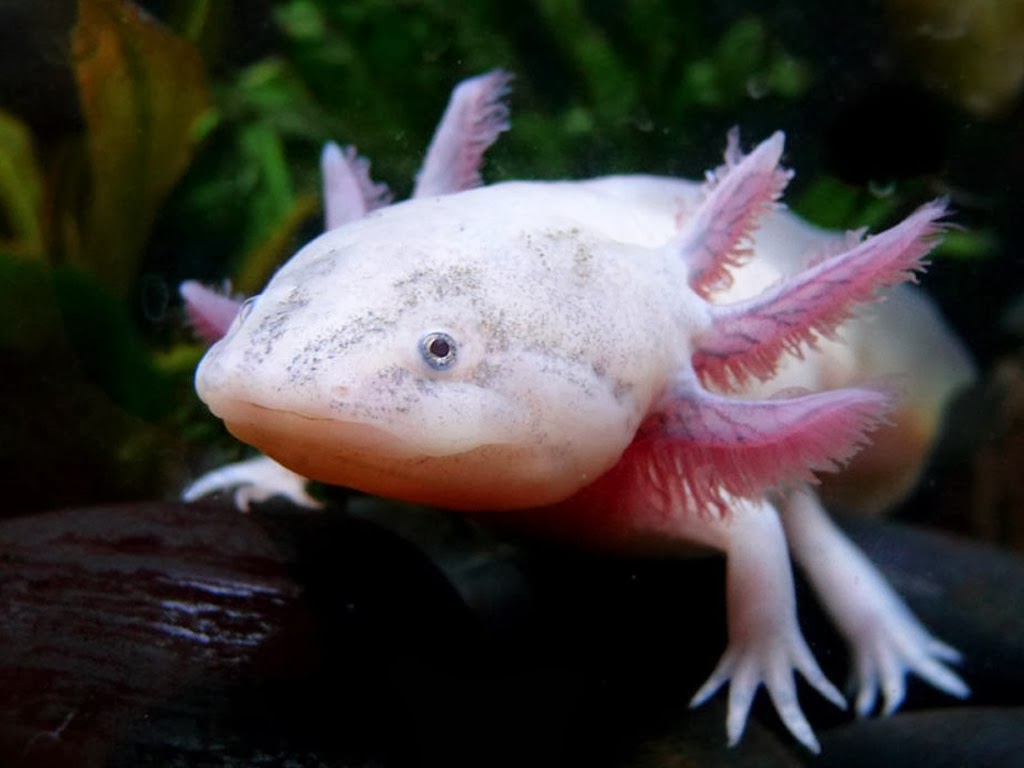 From a salamander to the superman

The benefit of cages of salamanders is that to start process of regeneration they don’t need to reach an embryonic condition – they perfectly work being adults. Having revealed a secret of “active cages”, doctors will be able to grow up to the person the torn-off hand or a leg by an example of a salamander.

“Once we will be able to regenerate tissues of people”, – one of authors of a research Malkolm Meden believes. Hopes of the American scientists in many respects are explained by the identity of customers of a research: it was prosponsirovat by department of defense of the USA which representatives want to help the veterans of Iraq and Afghanistan who transferred amputation.

In some sources even write that Axolotls can bring together literally themselves in parts – attaching to themselves the released parts of other relatives – including the heads.

Roughly speaking, if to take pieces of axolotls, to put together and to mix, then it is quite possible (we don’t undertake to approve for certain) that this vinaigrette will soon grow together in something single, will rise by paws and will go on the aksolotsky affairs.

Thanks to the unique capabilities, these animals are found now not only in Mexico – they can be found in scientific laboratories worldwide where scientists incessantly cut them on pieces and then put again as a mosaic, hoping to solve this focus-pokus.