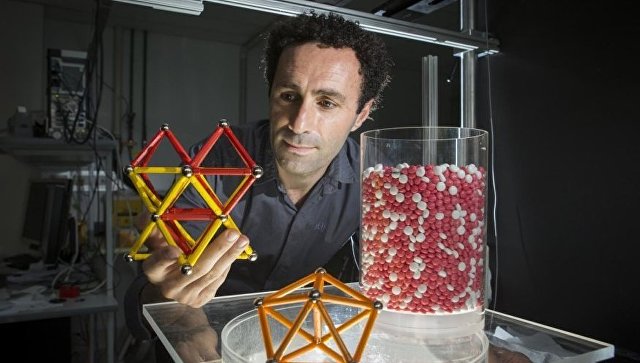 Physicists and mathematicians from Australia have found a way to pack wheat grains as tightly as possible, stretched capsules of medicines or nanoparticles, thus following the parable of the retribution from the Bible, according to an article published in the journal Nature Communications.

“In the Gospel of Luke there is the following line:” Give, and it will be given to you: a good measure, shaken down, pumped up and overcrowded will be poured into your bosom; For by what measure you measure, it will be measured to you. “This verse mentions all the things that we did in the lab: they squeezed, shook and poured in. Of course, I’m not sure that the Bible authors had in mind the same thing as we did “- jokes Mohammed Saadatfar (Mohammad Saadatfar) from the National University of Australia in Canberra.

Nevertheless, the physicist admits, the Bible posed one of the main and still unsolved problems in mathematics, physics and chemistry – how to place wheat grains or any other oblong structures so that they are as tightly packed and firmly packed. The solution of this problem is necessary, in particular, in order to most effectively transport cargoes, build more solid buildings from sand and distribute nanoparticles based on materials of the future.

Nature, as the scientists say, has long solved this problem for crystals and alloys – in their crystal lattices, the atoms are packed as tightly as possible. For example, the atoms of chlorine and sodium in crystals of common table salt occupy over 74% of the space due to packing in the so-called face-centered cube. The atoms inside such a cube are arranged so that on each side of it there are five ions of chlorine and sodium.

All attempts to squeeze grain or nanoparticles in a similar manner failed – at best, scientists managed to get them to occupy about 64% of the total volume of the material, forming random-shaped structures.

Saadatfar and his colleagues decided to find out why the grain can not be squeezed even harder by studying the manner of packing polyacrylic nanoparticles that physicists poured into containers of different sizes and shapes – into cylinders, spherical and rectangular bowls, and shaken with the help of vibration generators.

By exposing these structures using an X-ray and a computer tomograph, Saadatfar and his colleagues found that they actually do not have a random shape, but are organized into sets of five pyramids glued together, made up of three nanoparticles. Structures of this type, as noted by physicists, can not be packed more tightly, if not to force them to turn into cubic crystals – they will inevitably appear large pores and cavities.

This is not as simple as it might seem, since it requires a very precise amount of energy to be applied in order not to destroy the “crystals” and at the same time make them unstable enough to turn into cubic structures. Further experiments on “tumbling” and monitoring the movement of nanoparticles, as the scientists hope, will help to understand how this can be done.