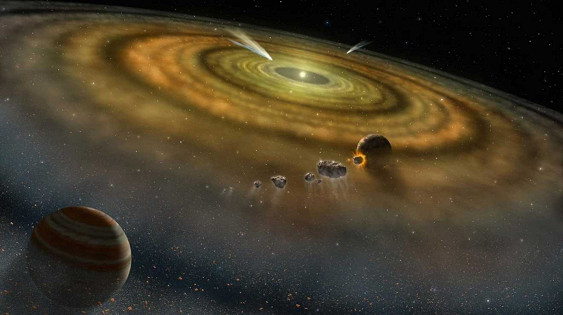 The planets were born from the substance of a gas-dust disk that rotated around the young Sun, unstable and weak. The heavier particles were more attracted to the star and eventually migrated closer to the center of the disk, giving rise to the rocky bodies of the inner solar system – Mercury, Venus, Earth and Mars, containing large amounts of silicon and iron. The problem is that these solid particles “stick together” badly with each other – so much so that the birth of whole planets requires some explanation.

In an article published in The Astrophysical Journal Letters, Alexander Hubbard of the American Museum of Natural History in New York pays attention to the young star of FU Orion. In 1936 this big yellow star flared up hundreds of times brighter than usual – and continues to shine so still. It is assumed that the additional radiation feeds the substance of the gas-dust disk, which the star absorbs. There are other stars known that behave in the same way – but what if, in such a period, the young Sun passed during the formation of its planets?

Hubbard concludes that only in this case the solar system could become what it was. The powerful radiation led to the heating and partial melting of solid particles of iron and other substances, allowing them to quickly form from them to future stony planets. According to the scientist, if there was no temporary intensification of the brightness of the star, such a melting could occur only much closer to it. This could give rise to a more compact system with hot and life-threatening planets such as Kepler-11, the furthest of the six planets which is twice as close to the star as Earth.

By the way, Hubbard’s hypothesis also explains the modest size of Mars. Its small size is usually associated with the attraction of matter from the side of Jupiter, but the other reason can be the distance to the Sun. Even young and – temporarily – extremely bright, it did not emit enough to melt large amounts of solid particles at such a large distance, where the Martian orbit is passing today.