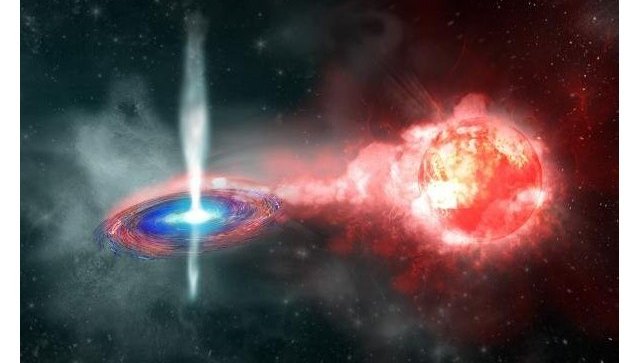 Physicists from Russia, USA and Europe found that “attack” the Earth’s a supernova about 3.2 and 8.7 million years ago was supposed to bring down the “biological clock” animals is to expose them high enough doses of radiation, and rapid evolution, according to a paper published in the Astrophysical Journal Letters.

“I was struck by how much these flashes affect the life of the Earth. I was expecting that the planet will not notice these supernovae – they happened quite far away, 300 light years from her. It turned out that cosmic rays will affect life on earth than we previously believed. This is of course, significantly increased the incidence of cancer, but also accelerated the accumulation of mutations, and through them – and evolution,” said Adrian of Melott (Adrian Melott) from the University of Kansas in Lawrence (USA).

Melott and his colleagues, including Russian astrophysicist Dmitri Semikoz of NRNU MEPhI in Moscow, came to the conclusion, assessing the impact from the explosion of a supernova in two 300-600 light years from Earth. Their traces in the form of unstable atoms of iron-60, occur only inside dying stars, was recently found on the ocean floor and in the rocks of the lunar soil, delivered to Earth expeditions “Apollo.”

As the scientists explain, the consequences of a supernova explosion can be divided into two groups – immediate and long lasting. The first gets itself the flash from the explosion in the optical and x-rays, and related phenomena – the destruction of the ozone layer, burns, temperature changes and other instant effects.

The impact of a supernova does not end there – her remains continue to generate a large amount of charged particles and atoms, accelerated to near-light speeds for centuries and even millennia after the explosion. All these traces of the supernova, according to the team Melotte could “bombard” the Ground through the tens of thousands after the extinction of the flash.

The calculations carried out by the authors, revealed a rather unusual pattern. Immediate effects of the explosion of the supernova was quite weak – they only plowed the biological clock all of the animals for a few weeks due to the large amount of blue light generated in the course of such outbreaks, and would have weakened the ozone layer, but would not cause mass extinctions or outbreaks of cancer.

On the other hand, long-lasting consequences will be less noticeable to the eye, but more interesting and life-threatening. According to scientists, a close supernova is about 20 times increases the rate of “bombardment” of the Earth muons and other particles, resulting in radiation load on living organisms at least triple.

This is a relatively small dose of radiation, even considering the impossibility to avoid it, and the increased background will not lead to mass extinctions, but only to an increase in cancer cases and the acceleration of evolution on Earth due to the increase in the rate of accumulation of mutations in DNA. Traces of this process as you think of Melott and his colleagues can be found in the micro-extinction, which occurred approximately 2.59 million years ago that corresponds to time window when there is one of these outbreaks.

As Kansas considers a physicist, this event could become the cause of humanity, in his view, the abrupt change of climate and the occurrence of savannas in Africa, which occurred just at this time and is presumably due to the evolution of the genus Homo, might be associated with supernovae. Of course, it recognizes a scientist, this idea is not like all his colleagues, and it remains to be proven. This idea, according to him, can be checked by measuring the proportion of different “space” isotopes such as beryllium-10 and carbon-14 in rocks of the time.