The burning dumps of India have struck scientists 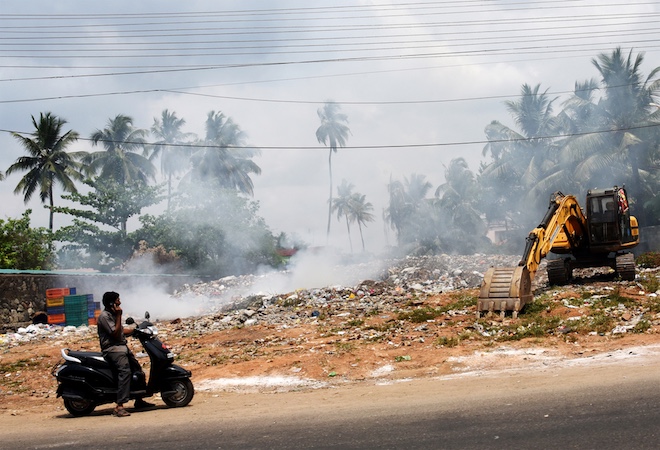 Scientists found out where there are one of the most toxic places on Earth: the huge number of hazardous substances was revealed in smoke from the flaring roadside dumps of garbage in India.

According to Heidi Wrilend from Duke University in Durham when scientists did measurements of quality of air near the burning garbage, detectors showed whole “bouquet” of pollutants. The coauthor of a research Michael Bergin noted that one minute spent nearby is equivalent to a dose of the toxins and hazardous substances received by the person for the whole day of stay in the city polluted by emissions from industrial enterprises and machines.

Vrilend told that the reason of such situation — lack of system on waste recycling. Annually on the planet about 2 billion tons of garbage most of which part in developed countries with the corresponding infrastructure is burned on dumps, remote from settlements, are made. In India the garbage is saved along roads while it isn’t decided to be set fire that leads to the strongest air pollution. Having researched analyses of samples of 24 burning garbage dumps in Bangalore, scientists found out that emissions contain all possible toxins, and their concentration reaches the highest limits — it causes in several hundreds times more of DNA mutations on the tested cultures of cages, than the “standard” polluted air. At the same time each dump had unique “set” of toxins that speaks about different components of garbage.

Scientists consider that for reduction of toxicity it is necessary to burn garbage very quickly, allowing to a flame to inflame as it is possible stronger, and also to extinguish fire right after combustion, without allowing decay and smoke when there is a development of the most part of toxic substances.