The Bushmen are the oldest people on Earth 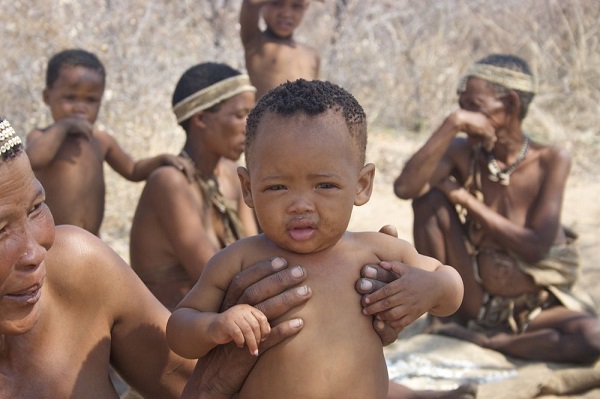 This ethnos is rich in its history, which helps to preserve the nation for more than 200 thousand years. Compared to them, the oldest Greeks, Chinese and Persians appeared as if yesterday. This people did not create empires, but simply lived, developing and preserving their culture.

San and Coe, better known as Bushmen and Hottentots, represent a separate Khoisan race. Koysan family separated from the human tree about 100 thousand years ago. There is evidence that the Bushmen became the very first race to introduce their language. As they belong to a separate branch, hundreds of questions concerning the mysterious race appeared among historians and scientists. This nomadic tribe lives in Africa and still does not know what modern society is and how people of the XXI century live. Watching this tribe, you can notice how naive and sincere were the inhabitants of the hot continent in ancient times. They do not have a permanent place of residence, they do not build entire cities and do not seek to earn all the money of this world.

Usually, Bushmen are considered to be related to the Negroid race, despite the fact that the skin color of the ancient people is much lighter. Moreover, they have Mongoloid facial features and a special bone structure of the small pelvis. Women of the tribe have an obvious pathology of genitals, which distinguishes them from any people of the Earth. The growth of Bushmen does not exceed 150 centimeters.

Genetic diversity of the ancient people still continues to surprise scientists from all countries. The carried out researches have shown: Bushmen have the greatest quantity of coincidences with initial universal genome. At the same time, it is surprising that two Bushmen born in one tribe, can differ from each other more than representatives of Caucasoid and Mongoloid race.

There are black stripes in the history of the ethnos. Conquerors-Europeans practically exterminated small African people. The main reason for this destruction was the consciousness of the tribe and their firm beliefs. Bushmen believe that everything in the world belongs to all people. That is, the basic concept of the “civilized” world – private property is unfamiliar to them. That is why they never occupied certain territories and preferred nomadic way of life. Trusting natives were ready to shelter anyone who joined their ranks, even ruthless murderers who hoped to conquer African lands that did not even belong to the ancient ethnos. They were raided, dogs were set on them, and their only refuge was burned – a dry bush. The fact that tribes still exist is surprising. Perhaps they were saved by a “communist” way of life. This is the only African tribe that has never had leaders and ruling families.

There are doubts, however

University of California scientists have suggested that indigenous Bushmen in Africa no longer inhabit the country’s territory. The tribe is now a mixture of several colonies and races. They argue that the existence of the tribe is undeniable and it is foolish to deny it. The main proof is the unified Khoisan language, which has a large number of unique clicking sounds. According to observations, Bushmen do not lag behind in their development and try to apply all the skills of modern man. They have no problems with medicine, as people are experts in chemistry and botany. Uniting with nature and a full sense of freedom – the real secret of immortality of this race.