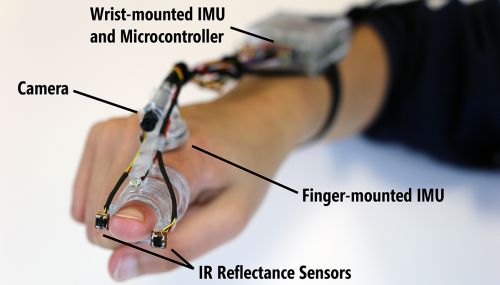 Now physically disabled people of sight can read only special books which text is printed with a tactile font of Braille. They can also get acquainted with e-books: some programs for reading comprise the module of the voice assistant. However reading traditional paper books is unavailable to such people.

Researchers from University of Maryland developed the HandSight device for the decision of this task. It represents the camera with a diameter of one millimeter which is used in medical probes. The camera is mounted in the casing with the vibromotor which is put on a forefinger. Application of HandSight provides its connection to the computer by means of a wire.

During operation the user carries a finger according to the page, and the image from the camera is transferred to the computer which reads the text. At the same time the computer analyzes setting of a finger: if it is delivered on the page incorrectly, and the camera sees only a part of a line or doesn’t see it at all, by means of vibrosignals the device will help the reader to find the correct situation.

The device was tested on 19 volunteers. By means of HandSight they were offered to read several pages from the school textbook and the entertainment magazine. Results showed that the speed of recognition and scoring of the text system made 63–81 words a minute. For comparing, average rate of reading the able to see person makes about 200 words a minute.