The cheetah robot was taught to jump on obstacles 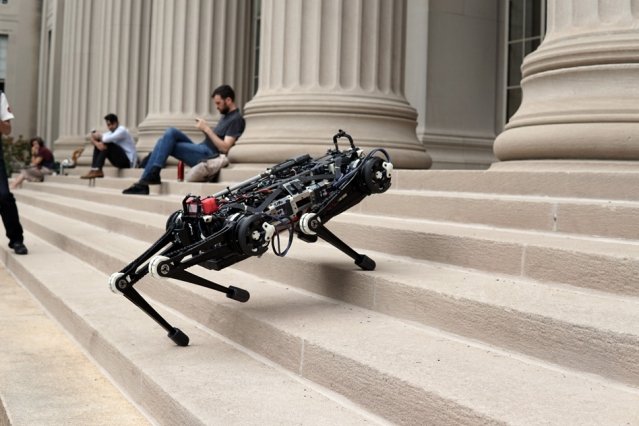 The specialists of the Massachusetts Institute of Technology presented an improved version of Cheetah 3 cheetah robot. The video posted on the web shows how the device moves on an uneven surface, can turn, jump on elevations and even climb blindly, without cameras and a predetermined trajectory. In addition, the developers demonstrated how the robot is able to walk on three legs.

The weight of the robot is 36 kg. In size, it does not exceed the labrador.

The robot is deprived of optical sensors, it moves blindly. The developers deliberately refused to use cameras, since such robots can be used in situations where the use of cameras is impossible. Cheetah 3 relies only on tactile information. Nevertheless, this does not prevent him from moving quickly and avoiding even unfamiliar obstacles.

A special algorithm calculates the position of the individual foot every 50 milliseconds, or 20 times per second. During the experiment, the developers repeatedly pushed the robot during the run. Cheetah 3 was able to maintain a balance by creating an opposing force. However, the robot did not deviate too far to maintain balance.