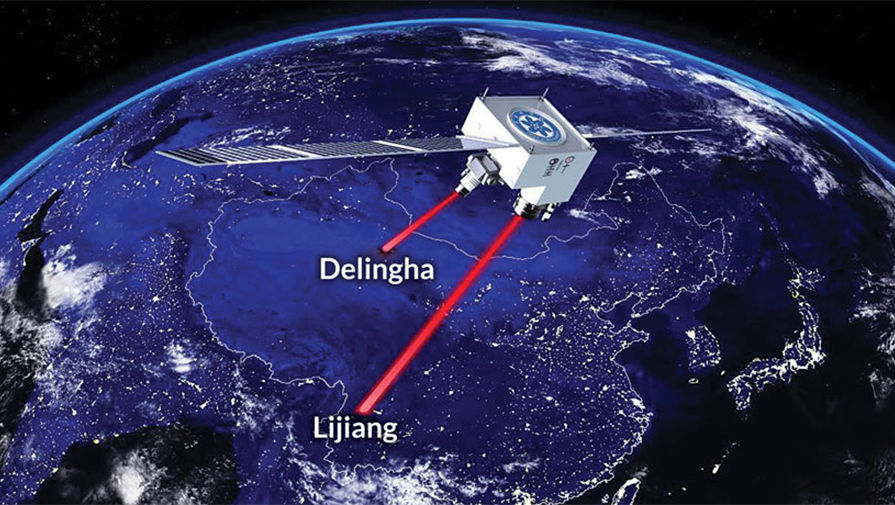 Chinese scientists set a record range in an experiment on quantum teleportation – 1200 km. At this distance, the photons associated with the satellite could “feel” each other’s state.

A group of scientists from the Chinese Academy of Sciences conducted a satellite experiment to transfer quantum states between pairs of entangled photons (the so-called quantum teleportation) to a record distance of over 1200 km.

The efficiency of such a connection turned out to be an order of magnitude higher than when transmitting photons through optical fibers in more traditional terrestrial telecommunication experiments. The corresponding article was published in the journal Science.

The phenomenon of quantum entanglement (or confusion) arises with the interdependence (correlatedness) of the states of two or more particles that can be separated into arbitrarily long distances, but they continue to “feel” each other. Measuring the parameter of one particle leads to a momentary destruction of the entangled state of the other, which is difficult to imagine without understanding the principles of quantum mechanics, especially since particles (this was specifically shown in experiments on violation of the so-called Bell inequalities) do not possess any latent parameters in which information About the status of the “companion”, and thus the instantaneous change of state does not lead to a violation of the principle of causality and does not allow us to transmit useful information in this way.

To transmit real information, it is additionally necessary to involve particles moving at a speed not exceeding light. As the entangled particles can act, for example, photons having a common ancestor, and as a dependent parameter, say, their spin is used.

To transfer the states of entangled particles to increasingly distant distances and in the most extreme conditions, not only are scientists interested in fundamental physics interested, but also engineers who design secure communications. It is believed that the phenomenon of entanglement of particles in the future will provide us in principle with unbreakable communication channels. “Protection” in this case will be the inevitable notification of the participants in the conversation that a third person has interfered in their communication.

Evidence of this will be the inviolable laws of physics – the irreversible collapse of the wave function.

Prototypes of devices for implementing such a protected quantum coupling have already been created, but there are also ideas for compromising the operation of all these “absolutely protected channels”, for example, by reversible weak quantum measurements, so it is still unclear whether quantum cryptography can escape from the stage of prototype testing not Whether all the developments are in advance doomed and unsuitable for practical application.

Another point: the transfer of entangled states has been carried out so far only to distances not exceeding 100 km, due to photon losses in the optical fiber or in the air, since the probability that at least some of the photons will reach the detector becomes vanishingly small. From time to time, there are reports of another achievement along the way, but it is not yet possible to cover the entire globe with such a connection.

So, earlier this month, Canadian physicists announced successful attempts to communicate on a protected quantum channel with an airplane, but it was only 3-10 km from the transmitter.

One of the ways to radically improve signal propagation is the so-called protocol of quantum repeaters, but its practical value remains in question because of the need to solve a number of complex technical issues.

Another approach is the use of satellite technologies, since the satellite can remain in line of sight simultaneously for various very remote places on Earth. The main advantage of this approach may be that most of the photon pathway will be practically in a vacuum with almost zero absorption and decoherence exclusion (coherence violation due to the interaction of particles with the surrounding medium).

To demonstrate the feasibility of satellite experiments, Chinese experts conducted preliminary ground tests that demonstrated successful bidirectional propagation of entangled pairs of photons through the open medium at distances of 600 m, 13 and 102 km with an effective channel loss of 80 dB. Experiments were also carried out to transfer quantum states on moving platforms under conditions of high losses and turbulence.

After detailed feasibility studies with the participation of Austrian scientists, a $ 100 million satellite was launched, launched on August 16, 2016 from the Jiuquan Cosmodrome in the Gobi Desert using a Changzheng-2D rocket to an orbit 500 km high.

The satellite was named “Mo-tzu” in honor of the ancient Chinese philosopher V century BC, the founder of Moism (the doctrine of universal love and state consequentialism). For several centuries in China Moism successfully competed with Confucianism, until the latter was adopted as a state ideology.

Due to the fact that entangled photons can not simply be “amplified” as classical signals, it was necessary to develop new methods to reduce attenuation in the transmission channels between the Earth and satellites. To achieve the required communication efficiency, it was necessary to achieve simultaneously both a minimum beam divergence, and high-speed and high-precision guidance to detectors.

Having developed an ultra-bright cosmic source of two-photon entanglements and high-precision APT (acquiring, pointing, and tracking) technology, the group established a “quantum linkage” between pairs of photons separated by 1203 km, scientists conducted a so-called Bell test to verify locality violations (the ability to instantly affect the remote state Particles) and obtained a result with statistical significance four sigma (standard deviation). 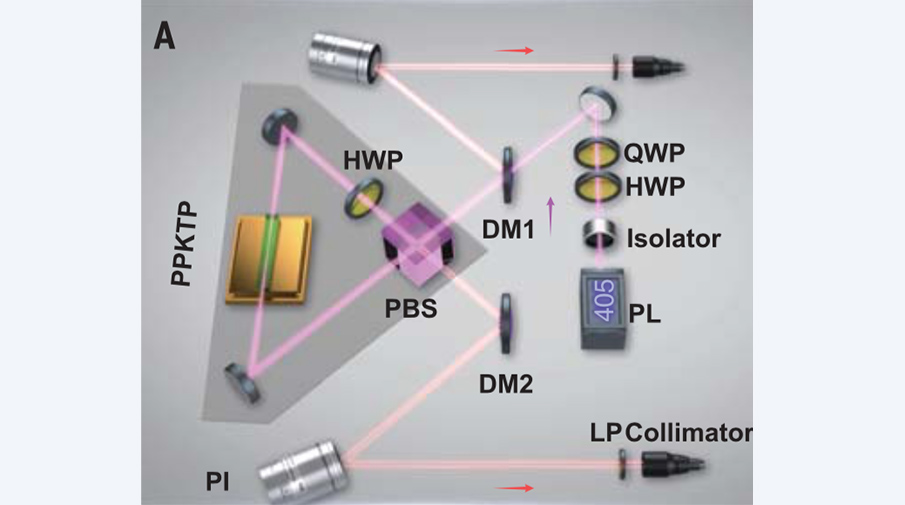 The scheme of the source of photons on the satellite. The crystal thickness of KTiOPO4 (PPKTP) is 15 mm. A pair of off-axis concave mirrors focuses the pump laser (PL) at the center of the PPKTP crystal. At the output of the Sagnac interferometer, two dichromatic mirrors (DM) and filters are used to separate the signal photons from the pump laser. Two additional mirrors (PI) remotely controlled from the Earth are used to accurately adjust the direction of the beam for optimal beam collection efficiency. QWP – quarter-wave phase section; HWP – half-wave phase section; PBS is a polarization beamsplitter.

Compared with the previous methods using the most common commercial samples of telecommunication optical fiber, the efficiency of the satellite connection turned out to be many orders of magnitude higher, which, according to the authors of the study, opens the way for practical applications previously unavailable on the Earth.