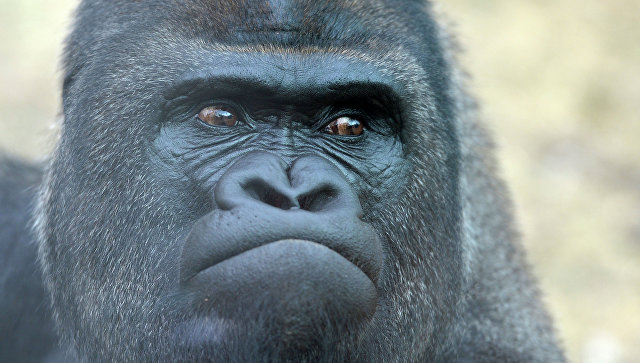 Population of the gorillas living in the territory of Congo was reduced by 77% for only one generation that transferred these primacies to number of critically vulnerable types and was connected, most likely, with a civil war in the region.

“We knew that Grauer’s gorillas are in danger, but nobody realized how their population was strongly reduced. The results received by us are good cause to include this primacy, the largest representative of our group on Earth, in number of critically vulnerable types of the Red List” — Andrew Plumptre from Society of preserving wild animal (WCS) declared.

Plamptre and his colleagues came to such conclusion, having collected and having studied data on the sizes of an area of dwelling and number of Congolese gorillas (Gorilla beringei graueri), the first for the last 20 years, from the moment of the beginning of a civil war in the Democratic Republic of the Congo in 1996.

So-called east flat gorillas, or Grauer’s gorillas, live in the east of DRK, in the neighborhood of Lake Kivu, near border with Rwanda, in two national parks – Mayko and Kakhuzi-Biga, and also in the woods adjoining to them. These subspecies of gorillas are considered the largest representative of the type, and also the biggest primacies on Earth – growth of the largest males reaches 1,94 meters, and weight – about 250 kilograms.

In 1994 in Rwanda the civil war between the Hutu and the Tutsi which led to genocide and mass flight of residents of Rwanda to the east Congo, adjacent to national parks broke out. Thanks to it in 1996 in the territory of DRK the own civil war which led to the fact that the international community lost access to national parks whose personnel were dispersed or killed with various groups of fighters began.

The destiny of gorillas caused a special concern in ecologists as insurgents began to use the woods in the east of DRK for illegal and secret mining. They, used a predictable image local flora and fauna as livelihood sources, and scientists were afraid that gorillas as the largest beings in the Congolese woods who never are climbing up trees can suffer from it most strongly.

It turned out how Plamptre notes that his colleagues underestimated disaster scales. In 1994-95, by the last estimates of ecologists of that time, in the territory of Congo there lived about 17 thousand gorillas of Grauer. In 2011-2015 when authors of article conducted own “census” of the population among these primacies, their number fell to 3,8 thousand individuals, and density of their population in some corners of the woods decreased more than by 8 times.

Similar sharp reducing, according to researchers, says that Grauer’s gorillas are under the threat of extinction now if no measures for their protection against the person are taken. Scientists urge International union of conservation to transfer Gorilla beringei graueri from among the types which are in danger to number of types to which extinction threatens.

According to Plamptre, the current measures for preservation of gorillas, despite improvement to a political situation in Congo, it is obviously not enough to introduce more rigid restrictions on mining for their rescue and therefore ecologists call the international community and the authorities of DRK and more actively to fight against illegal mining. If measures aren’t taken, then Grauer’s gorilla can disappear from the majority of points of her current area of dwelling in the next 5 years.