The clothing of the Inca mummies was impregnated with poison 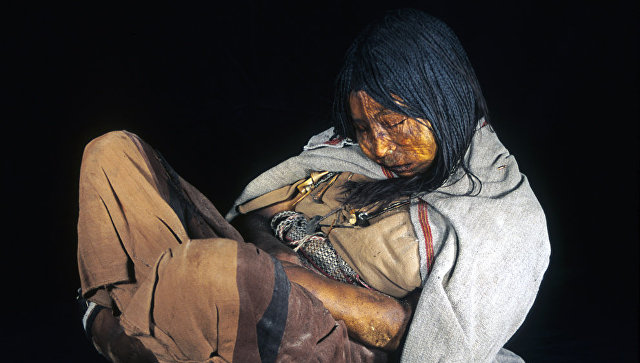 The robes of the famous two famous mummies of girls from Chile were saturated with deadly poison, red paint based on mercury, extremely rare at that time. It could be part of Inca rituals, as well as banal protection from robbers, scientists write in an article in the journal Archaeometry.

“The Incas knew very well that the paints from cinnabar are very toxic and dangerous to human health by constant contact with them, they often covered them with tombs in order to scare off the robbers, and in this case something similar could happen,” write Bernardo Bernardo Arriaza) from the University of Tarapaca in Arica (Chile) and his colleagues.

Gift to the Sun

The ancient Incas, like many other Indians of South America, knew how to make mummies. Dozens of mummified bodies of children sacrificed to the Sun in the framework of the “kapa kocha” ceremony. They were found on the slopes of mountain peaks in Chile and Peru. For example, in 1976, the builders found the mummies of two girls in a cave at the top of the Cerro Esmeralda mountain, and in 1999 archaeologists found the famous “ice princess” on the slopes of the Ljullyaylako volcano.

An analysis of their remains showed that these children were fed good food and were in a state of almost constant narcotic intoxication in the last year of life. Tomography mummy “princess” showed that before her death the girl chewed a bundle of coca leaves, the particles of which were stuck between her teeth.

Arrias and his colleagues uncovered another curious detail of the life of these children and the last days of their existence on Earth, studying the rich clothes in which were dressed two mummies found on the slopes of Cerro Esmeralda – a nine-year-old girl and her 20-year-old “older sister” .

Scientists, as Arrias notes, have long attracted traces of bright red paint, preserved on some parts of their clothes. The nature of this pigment has long been controversial. Most researchers believe that the clothing of sacrificial children was covered with pigments based on hematite, a combination of iron and oxygen.

On the other hand, scientists who studied mummies at the site of their burial in 1977 found traces of cinnabar, bright red compounds of mercury and sulfur, in the soil of their tombs, which many archeologists today doubt. Arrias and his colleagues checked these theories by going to the slopes of Cerro Esmeralda to collect new soil samples and to the museum of Iquique, where the remains of two mummified “princesses” are stored.

Cutting out small pieces of cloth, the archaeologists enlightened them with the help of electron microscopes and spectrographs, which enabled them to understand what pigments were used for their coloration. As shown by this analysis, both clothes and soil of the tomb contained a large number of mineral grains, consisting of 81% of mercury, and 15% of sulfur, and not of iron and oxygen.

On the one hand, this discovery confirms the words “pioneers” of mummies. On the other hand, the presence of cinnabar in this region was a big surprise for historians, as the inhabitants of the north of Chile at that time used very different colors, and mercury dyes could very rarely be found only in noble houses. In addition, mummies’ clothing from neighboring regions of Chile, as noted by scientists, were covered with red paint based on hematite, and not cinnabar.

Accordingly, the use of a relatively rare pigment to decorate the clothing of the kapa kocha victims speaks of two things – similarly, the priests emphasized their high social status, or they used cinnabar to scare off “evil spirits” and potential tomb robbers by covering clothes with toxic paint and scattering red powder on the tomb.

A similar fact, as Arrias notes, is interesting not only from the point of view of studying the history of the Inca empire, but also to protect archaeologists from the famous “curse of mummies”. The fact is that inhaling even small amounts of cinnabar can lead to serious consequences for human health, and therefore scientists should be extremely careful to excavate in such tombs.